Women honoured for support of children at RAF base 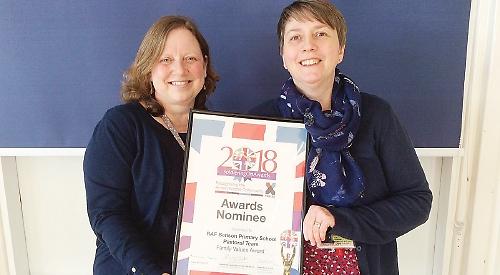 TWO women who support children whose parents are serving abroad in the Royal Air Force have been recognised for their efforts.

Suzanna Rodulson and Bev Kellett were nominated for the Family Values Award in the Soldiering On Awards for their work as pastoral support officers at RAF Benson Primary School.

They didn’t make it to the final but were highly commended for the work they do at the school.

The pair were presented with a certificate by headteacher Steph Fawdry during a school assembly. Mrs Rodulson said 99 per cent of the children at the school had parents in the RAF, which meant they had to move home regularly.

She said: “It’s very rare that a child will go from reception all the way through to year six, whereas in a mainstream school that’s a common occurrence.

“I run a group called Social Circle and that’s for all the children who have a parent deployed. We get together and make things to send to mums and dads and play games together. It’s supporting them with the comings and goings and the postings and any worries they might have about moving and making sure it’s not a barrier to their learning.

“It makes the children so much more sociable and welcoming to children coming in. When someone new arrives they are swept into friendship groups.

“I started the group about 10 or 11 years ago. I’m a military wife myself and I have two daughters so it’s understanding all the changes and what the children go through.”

She said the award was a surprise but it was nice to be recognised, adding: “Bev and I said it’s something you do because you love doing the job and supporting the children and making sure they are happy at school.”

The Soldiering On Awards recognise the achievements of those who have served their country as the people and groups which work together in support of the armed forces community.