Base photographer receives RAF apprentice of the year award 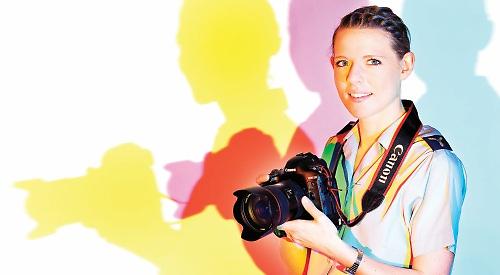 A PHOTOGRAPHER from RAF Benson has won an award.

Senior aircraftwoman Amy Lupton was presented with the apprentice of the year award at a ceremony at the RAF Museum in Hendon.

She has worked at the base since September 2016 after graduating from the Defence School of Photography in Cosford.

Her photography helps promote the work of personnel at Benson and their achievements.

She also documents the process of repairing aircraft from start to finish. SAC Lupton said she was at a conference when her sergeant rang her to say that instructors at the school had asked to nominate her for the award.

“I didn’t really think much of it at the time, so when I was told that I’d won I was pretty shocked,” she said.

She is currently undertaking a 100 Faces project in celebration of the RAF’s centenary.

SAC Lupton said: “I’m loving it. Being new, it has been a good way to meet people as Benson is a really diverse station.

“As this is my first posting, I don’t understand a lot of the RAF yet and what people do on other stations, so it has been good to see the other sections and what they do.” She said her work had taught her new skills, such as medical and dental photography.

“The diversity is what I wanted to join the RAF for,” she said. “I’ve also gained confidence — I’m still quite a shy and retiring person but when you get put in front of 100 people for a group photo, you’ve got to make yourself known and heard.

“I’m still trying to improve on that but it has definitely built up my confidence to go and speak to people that I probably wouldn’t have before.”

SAC Lupton also won the Student Mallett Trophy at the RAF Photographic Competition in 2016 and produced a fund-raising video for a charity parachute jump by the late Anna Irwin, which gained more than 80,000 views online in 24 hours and helped raise more than £20,000 for charity.

Flt Sgt Irwin, 37, was a Chinook helicopter crewman and a veteran of Iraq and Afghanistan who had completed 11 tours and then trained crews.

She was diagnosed with incurable lung cancer in April 2016 and died in October, seven months after winning won the services category and the overall award at the Sue Ryder Women of Achievement awards.