Scouts wash cars in aid of trip to American jamboree 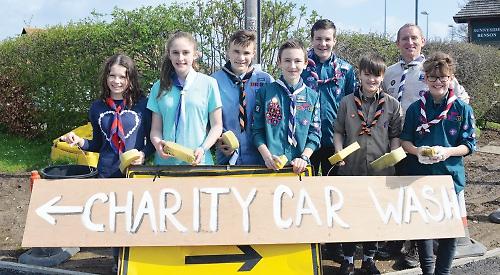 A CAR wash held by scouts from Benson and Wallingford raised more than £700 towards their trip to the 24th World Scout Jamboree in America next summer.

Eight scouts aged 13 to 16 cleaned about 100 cars outside Benson parish hall on Saturday as well as selling bacon butties and coffees. They will be among 36 scouts and four leaders who will travel to West Virginia next July.

Martin Lock, 1st Benson scout leader, said: “Each one has got to raise £4,000. Although that’s quite a lot, it allows the less well-off nations to be subsidised because there are scouts from across the world going and not all of them can afford that much. It’s a once-in-a-lifetime trip and I think will mean a lot more to them because they have paid to do it themselves rather than have a holiday that’s been handed to them.

“We started this in October last year so that gives them about 18 months to raise the money. The kids are pretty much working every weekend between now and next summer, selling cakes, helping with car parking and litter-picking. They are not doing too badly — they have just broken the £25,000 mark and it all goes into one big pot.

“The car wash was really successful. There were some very generous people and everyone was really pleased with the hard work the kids put in and their enthusiasm.”