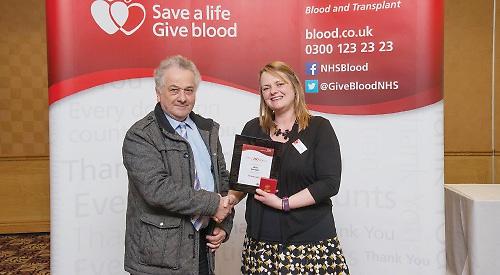 TWO men from Watlington and one from Benson have been recognised for making 750 donations of life-saving platelets.

John Sennett, Phil Clarke and Robert Patience were among 47 blood and platelet donors honoured by NHS Blood and Transplant at a ceremony at the Oxford Belfry in Milton Common.

The recipients were presented with a certificate, pin badge and medal marking 250 donations each.

Platelets are tiny cells made in bone marrow which help stop bleeding. Most donated platelets are given to patients who are unable to make enough of their own due to having cancer, leukaemia, or having undergone major surgery or suffered extensive blood loss.

All three men donate at the John Radcliffe Hospital in Oxford once a month.

Mr Sennett, of Pyrton Lane, Watlington, has been donating platelets since 1994 and has now made 300 donations. He said: “I started donating as a result of an approach by a persuasive member of the mobile staff when the wagon was at Chalgrove and I was at my first donation.

“I worked out the other day that I’ve driven 12,000 miles from Watlington to the JR over the intervening period.

“It’s as easy as falling off a log but not painful. You’re connected to a special machine which centrifuges the platelets out and returns the rest of your blood to you over a period of about one-and-a-half hours while you’re plied with drinks and nibbles.

“The centrifuge bowl in the machine costs over £60 and is used just for your single donation and is then disposed of and each donation can be given to three adults or up to 12 children and could save that many lives. I’ve had touching letters from parents thanking the donor for saving their newborn baby’s life.”

Mr Clarke, 60, a publisher, of Westfield Road, Benson, has made 280 donations.

He said: “It’s always pleasing to be recognised for donating. I started as a blood donor when I was a student 40 years ago and have continued.

“About 15 years ago I was contacted by the service to say that I had a special type of platelet and would I be interested in donating them because they needed them at that time.

“They are universal platelets, which means they can use them in emergencies and give them to very small children.

“We do it to save lives. To see all those people in that room who have all donated at least 100 times, and some 250, and to think of all the lives that they have helped was quite a warm feeling.

“It’s very easy to donate. In fact, from my point of view, if someone wants an hour once a month to lie down and relax and forget about work it’s almost therapeutic.”

Robert Patience, 54, a welder, who used to live in Sycamore Close, Watlington, but recently moved to Chinnor, has donated 250 units of platelets.

He said: “It has taken me 25 years but it’s well worth doing. I’m pleased that I’m giving something back to people. You never know when you’re going to need the blood or the platelets yourself.

“I donated for the first time when the Gulf War started because I thought it would help soldiers.

“I wanted to join the army but didn’t manage to get in and I wanted to give back something.

“I’d like to say thanks to my boss for letting me out to donate. It’s giving other people the chance to live.”

He urged other people to donate saying: “You don’t feel it and all the people at the hospital make you feel at home.”