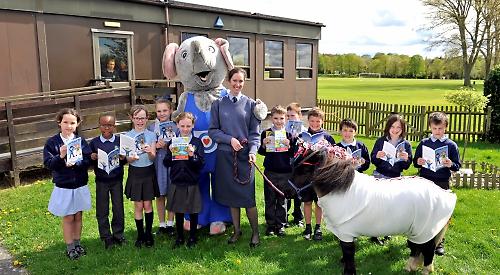 A NEW series of books aimed at improving the mental health of service personnel and their children was launched at RAF Benson Primary School.

The RAF Benevolent Fund, the force’s welfare charity, is piloting the books in response to research which found that more than half of military parents believe a military lifestyle has a negative impact on their children and leads to an increase in psychosocial problems.

The Cloud Nine series was commissioned by the fund as a helpful guide for RAF families and to give them the techniques to promote mental wellbeing and emotional resilience.

There are four books aimed at different age groups — A Day in the Clouds for four- to seven-year-olds, Super Dooper You for eight- to 12-year-olds, Tactical Manoeuvres for Life for 12- to 16-year-olds and Roots and Wings, a parents’ handbook.

Alison Wyman, the fund’s head of welfare programmes and development, said: “These books are designed to be picked up as and when life gets a little tough and extra support is needed, such as when moving house or when a parent is deployed.”

Community development officer Meg Wickett, who works at RAF Benson, said: “I have been working with RAF families for a number of years so I know the difficulties they face. I think these books are unique and much-needed.”