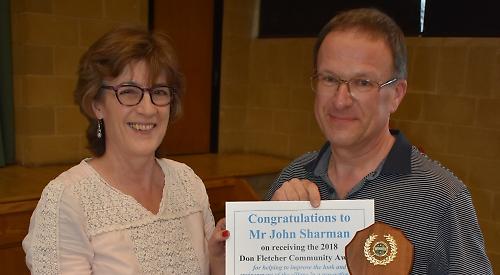 A MAN who started a group to help keep Benson tidy has been
honoured for his efforts.

John Sharman, 59, was presented with the Don Fletcher Community Award, given for outstanding support to Benson, at the village’s annual parish meeting on Thursday last week.

The council said the Benson Tidy Group, which first met in September, had helped to improve the look and environment of the village in a “pro-active and innovative way”.

It has about half a dozen volunteers who meet on a monthly basis to carry out cleaning and weeding.

Mr Sharman, of Westfield Road, thanked the council and said: “I’m very pleased — I didn’t know an award like that existed so when I got an email I thought ‘oh wow’.

“I’m most surprised. We have only been going a little while but I’d like to thank those people who come along and help.

“I accepted it on their behalf as well, so it’s not just me. It’s nice to be recognised by the local community.

“It’s important to take pride in your community and I could see that certain jobs weren’t getting done around the village making it look a bit sad.

“Things need tidying, sweeping and cleaning — it makes such a difference to the village when people can see things are being done. It gives people the idea of taking pride in their village. I don’t think the parish council needs anyone else to moan. You don’t get anywhere by moaning, you just upset yourself, upset other people and at the end of the day it’s not difficult to be positive and pro-active. It makes you feel better and everyone else feel better.”

He added: “Benson is a great place to live, we’re very lucky, and I think that’s the root of it.”

The volunteers are currently concentrating on improving the High Street and plan to tackle two bus shelters on the A4074, as well as flower planters and notice boards in the village in the future.

“It meets once a month during the summer months to work on the areas of Benson that need a tidy up, a litter pick and weeding so that Benson can look the very best it can. We’re very grateful to John for putting this group together.”

The Bob Griffiths Trophy was awarded to students from Wallingford School’s community project for carrying out painting and refurbishment work around Benson, but they didn’t attend the meeting.

If you would like to join the Benson Tidy Group, email mrjohnsharman@hotmail.co.uk