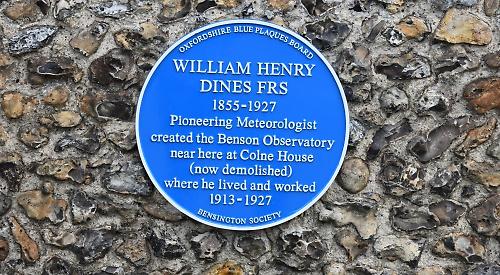 A BLUE plaque honouring pioneering meteorologist William Henry Dines has been unveiled in Benson, where he lived more than a century ago.

About 50 people gathered at the ceremony at the Old Barn on Saturday afternoon.

Dines, who was a leading inventor of meteorological instruments, lived in Benson from 1913 to 1927.

He created the Benson Observatory at Colne House, which was later demolished and is now where Observatory Close is located. The Old Barn was formerly part of the Colne House estate.

The blue plaque is the first to be installed in the village.

The installation was proposed by the Bensington Society following research by members Sue and David Cooper, from Ewelme.

Mrs Cooper said: “It has been years maturing this project so it was really gratifying to get it done and I think the plaque looks very nice on the wall. Dines’s work was very important, particularly the early work on measuring wind speeds and things like that because a lot of the information he collected was still in use until really quite recently. It has enduring value.

“His instruments, while they look a bit large and clunky compared with what’s used now, have remarkable endurance.”

Mr Poole, who lives near Leatherhead, said: “It’s an honour for the family because he was a very eminent man. The more people who do know about his achievements in the village, the better. He was a very quiet man and just got on with his job and with the work he was interested in.”

Robert Evans, chairman of the Blue Plaque Board, said: “What we’re doing is making history more available to the public.

“This particular occasion is celebrating Benson because it’s the first plaque in the village. The Bensington Society proposed it because they thought Dines was a man particularly deserving of the honour.

“He was a pioneering meteorologist and a man of distinction in his day. He was exploring the upper atmosphere at a time when you didn’t have rockets.”

Councillor Sanders said: “Dines was a very talented gentleman and was doing a lot of pioneering work in an age when you didn’t have the instruments or technology we have today. The blue plaque is to show people who lived there and did great things so we should remember them.”

Dines had a first class maths degree from Cambridge and, with the advantage of private means, was able to dedicate his life to experimental meteorology.

In 1892 he invented the pressure tube anemometer which could measure wind velocity and direction with much greater accuracy. The instrument was still being widely used almost a century later.

Although an amateur, Dines held an official position as director of experiments on the upper air from 1905 to 1922 and was elected a Fellow of the Royal Society in 1905.

In 1913 he moved to Colne House and set up the observatory from which he sent daily reports to the Meteorological Office at Kew.

Areas of research included cyclonic and anti-cyclonic movement in the upper atmosphere, solar radiation and radiative heating rates from the ground to a height of 16km and night-time radiation.

The observatory became obsolete in 1939 when RAF Benson was established with its own air ministry weather station.

Colne House was sold and then demolished in 1971 to make way for housing.

To coincide with the plaque unveiling, the Bensington Society held an interactive exhibition about weather and water.