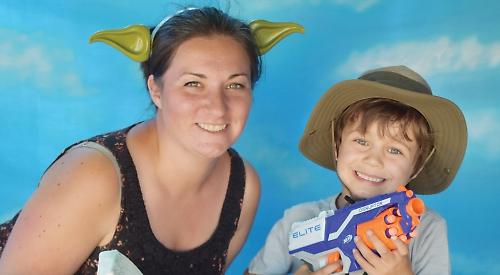 There was also a barbecue, a bar and an ice cream stand, which did a roaring trade as the sun shone and temperatures topped 30C. Personnel from RAF Benson had brought along a life raft which children could climb inside and there was a Star Wars-themed shooting game.

The day was organised by the Friends of Benson School and raised more than £2,500.

Friend Nicola Hewitt said: “We were so pleased with the turnout and the weather. All the children seemed to have a great day. Events like this show the community spirit of Benson as well as help raise valuable funds for our small people at the school.

“It was heartwarming to see the school staff, parents, scouts, RAF and pupils come together and give so much of their own time and effort to make it happen.

“You really get to see how much creativity and talent there is with things like the home-made tin can alley stall and the nostalgic treat of a vintage tea café.

“One group of parents willingly faced the blazing heat of a barbecue for hours on a scorcher of a day.

“The organisers were all new this year so we were all delighted that, with a lot of help, it went so well.”