Pupils create turtle out of bottles to warn of plastic pollution 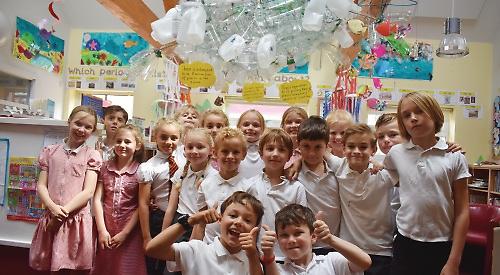 CHILDREN from Benson Primary School are raising awareness of the dangers of plastic pollution.

They have created a two-metre-long structure in the shape of a leatherback turtle from milk cartons, drinks bottles and plastic bags, which has been suspended from the ceiling of a classroom.

Every child at the Oxford Road school contributed, bringing in items of plastic waste from home to attach to a wire frame with the project taking three days to complete. The children want to stop people from discarding their plastic waste and recycle more in order to prevent less going into the ocean, where it can harm marine life, or into landfill.

They first learned of the problem in a science topic looking at environmental disasters and pollution last term. They were shocked to learn more than eight million tonnes of plastic is dumped into the oceans each year.

Year four class teacher Julia O’Reilly, who led the project with her colleague Megan Parris, said: “The children were pretty appalled really when they started to look into this and how much was put into the ocean and landfill. Megan and I are art co-ordinators and we thought we could do a whole school project. The children wanted something that grabbed people’s attention and highlighted the problem.”

She added: “I think things like this start at home. It’s making people stop and think ‘do I need to get a plastic straw? Can I reuse this? Do I need to buy something in plastic packaging?’”