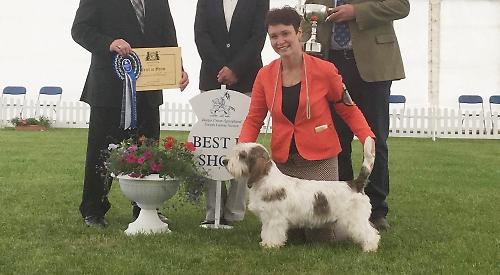 A DOG belonging to a woman from Benson won the top award at a prestigious show.

Magic Mike, a three-year-old petit basset griffon vendéen, beat 5,554 other dogs to the best in show title at the Border Union Championship Dog Show held in Kelso in the Scottish Borders.

He lives with Sara Robertson and her husband Gavin who run the Avalon Pet Hotel in Old Icknield Way.

The couple had already experienced success with Mike’s mother, Jilly, who won best in show as well as best in breed and best hound at Crufts in 2013.

Mike, whose official Kennel Club name is Champion Soletrader Magic Mike, is now the top show dog of all breeds for 2018 at the halfway stage and if he can hold on to his lead until the end of the year, he will emulate his mother.

Mrs Robertson, who owns Mike in partnership with Wendy Doherty, from Ontario, handled him in the show ring, having competed at dog shows since she was a child.

She said: “Border Union is always an enjoyable show and Mike seemed to enjoy it too. He really is a terrific show dog and it is a pleasure to show him as he likes all the attention.

“First and foremost he is our family pet and our two children absolutely adore him. A day out at a dog show is a real treat for the whole family and naturally it is very exciting when Mike performs well and catches the judge’s eye.”