Benson's got (a lot) of Talent 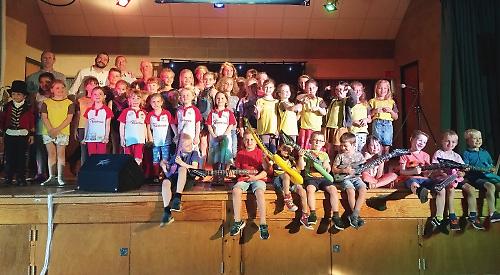 A total of 16 acts, ranging in age from four to 65, performed at the parish hall in Sunnyside to an audience of about 175 people.

The Benson brownies sang Ging Gang Goolie and This is Me from the film The Greatest Showman while the Benson Rainbows also sang.

A group of boys from Benson Primary School sang We Will Rock You by Queen and resident Adrian Lovett, who organises the annual Great Get Together in the village in memory of murdered MP Jo Cox, read poetry.

Organisers decided not to have a winner.

Charlie Stratford, 46, of Passey Crescent, who organised the show with his wife Carol and neighbours Helen and David Lowe, said: “Last year we had six acts and it seemed to go down very well and this year we thought we’d go for it again and we almost tripled the number of acts.

“I thought it was fantastic. We had stand-up comedy, gymnastics and various music acts — some singing to backing tracks and some singing on their own. There was also poetry reading, folk music and dance acts.

“I’ve had lots of feedback and people saying they had a great time, which it makes it all worthwhile.”