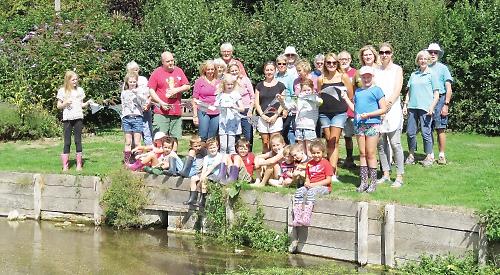 SIXTEEN children took part in a series of nature activities at the fifth Dr Anne Day.

The event is held each year to recognise the late Benson GP Anne Millar’s contribution to an ecological group.

Dr Millar, who died in October 2013, aged 86, was passionate about wildlife and involving children in outdoor activities.

The six- to 11-year-olds who took part in this year’s day at the Ewelme watercress beds nature reserve began by opening moth traps which had been set overnight. The children were delighted to find three poplar hawkmoths, which they held in their hands to examine at close quarters.

Other activities included a photographic competition on the theme of “patterns”, pebble art and bunting decorating.

There was also a bird-themed scavenger hunt, where the children had to find pictures of birds hidden around the site and identify the species.

The children also raced boats that they had made on the theme of “pirate ships”. The day ended with a barbecue. The event was organised by the Benson Nature Group, previously known as the Benson Ecological Study Team, which Dr Millar helped found.

The GP moved to Benson in 1953 with her husband Andrew. At the time she had a young family but started working in the practice in Mill Lane as an assistant in the mid-Sixties.

For the next 20 years all medical services in Benson were run from the family home.

In 1970 the Dorchester Partnership split up and the main practice moved to Berinsfield. The couple became partners in the new practice in Benson.

After her husband died in 1982, Dr Millar continued to practise for another eight years, during which time she helped to plan and build the new Mill Stream Surgery in the village.

Dr Millar also served on Benson Parish Council after her retirement from medicine and helped with the planning of the new parish hall.

The council named Millar Close in the village after her.