New classrooms will take away quarter of school playing field 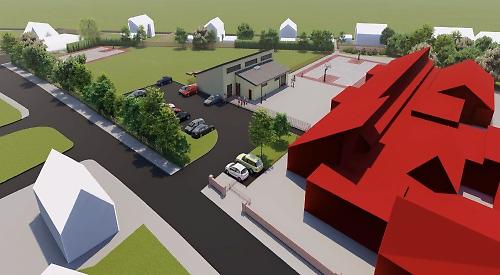 THE expansion of Benson Primary School will remove a quarter of the adjacent playing field.

The Oxford Road school  plans to build a three-classroom block with a hard play area outside.

This should be completed in time for the start of the next academic year in September 2019, providing South Oxfordshire District Council grants planning permission.

Oxfordshire County Council, the education authority, will fund the work, which will be carried out by developer Kier.

Meanwhile, housebuilder Cala has agreed to provide a sports field for use by the school at a site off Littleworth Road where it is building 241 homes.

The school needs to expand in order to meet the demand that will be created by the construction of hundreds of new homes in the vilage. It currently has the maximum of 30 pupils in its years one and two classes while the reception class has 27 children.

In a letter to parents and carers, headteacher Helen Crolla and chairwoman of governors Jo Chapman said the reception class would be 45-strong in September 2019.

They said: “In order to accommodate the increase in numbers, we need to have more classrooms.

“The council and developers have carried out a full audit of the existing site and rooms, consulted with the school and have concluded that the best viable option is to build additional classrooms.”

The pair said the section of playing field will also be used to accommodate a new car park.

Playtime will continue to take place on the existing school site.

The letter says: “As you will see from the designs, this is not a major impact on the playing field and we will still be able to teach physical education, run clubs and sporting events.

“The county and the school have a responsibility to provide an education to all children. Ultimately, the decision on designs and whether the plans are approved sits with them and the planning department and not with the school.

“However, the school has been involved in many meetings with them and the developer and they have listened to our feedback, concerns and challenges and made amendments where possible.”

The pair said Kier wanted the safest and least disruptive access to the school and the site would be boarded off and secure.

The company had also agreed to send representatives to the school to teach the children about building site safety.

The women ruled out suggestions by residents that the old Keable building site in Littleworth Road could be used instead as the land is not owned by the countyl council or the Benson Church of England Voluntary School Trust and there is no budget to explore its potential or  possible purchase.

They said: “If you were to build on the land, space would determine a two-storey building, which is not suitable for the school or surrounding houses. There is also a protection order on a tree within the land.”

Mrs Crolla and Mrs Chapman said pupil numbers were forecast to continue to grow and so discussions about a second three- classroom building had taken place but no plans had been finalised.

This would not be required until 2024, although the demand would be continually evaluated as the new homes were built.

The letter added: “We want to reassure parents that, regardless of the possible expansion, we aim to maintain the nurturing ethos and values of our school, providing a balanced and rounded curriculum which is underpinned by a dedicated senior leadership team, governing body and wider school team.”