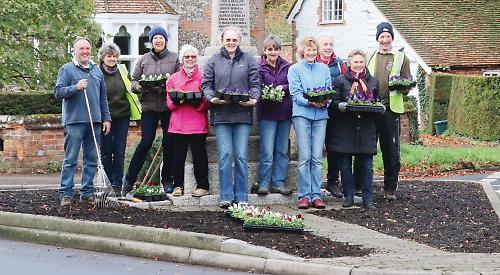 MEMBERS of Benson Garden Club grew 300 violas for a special display to mark the Armistice.

The flower beds around the war memorial at the junction of Church Road and Oxford Road have been planted up with 1,900 of the red, white and blue flowering plants to look like two Union flags.

The work was carried out in time for the Remembrance Sunday parade and service this weekend, which will mark the centenary of the end of the First World War.

Nine members of the club volunteered to help after being told about the initiative by villager Richy Irwin, a warrant officer at RAF High Wycombe, in March.

Chairwoman Esther Chamberlain said: “Richy came along with a design on an A4 piece of paper.

“He said, ‘I’m going to do this design and I’m wondering if you can help me grow the violas?’ He was so determined to do it even though he didn’t have the expertise.”

Purely Plants, of Wallingford, provided the gardeners with seed trays and grew the remaining 1,600 plants needed for the display.

Mrs Chamberlain said: “It looks amazing and it was nice to be involved in a community effort. The people who grew the plants have been really pleased to take part. Some people grew 12 plants and some people grew 100.”

WO Irwin, 53, volunteered to take over the maintenance of the memorial last year.

He said: “I was already thinking ‘it’s the centenary, I need to be thinking something pretty special’. It was a very small stretch to think of Union flags in flowers. I had no idea what plants to use and how to do it and that’s when I gatecrashed the garden club’s meeting!

“I’m delighted — it’s looking really, really good. It will have an instant impact for remembrance but there will be lasting impact over the winter.”

Meanwhile, Benson Parish Council has agreed to spend £1,085 plus VAT to have lettering on the village’s war memorial repainted. It will seek to recover some of the cost from the War Memorials Trust.

The council will also plant a tree to mark the Armistice. It will obtain a “Tree of Remembrance” sapling and commemorative plaque from the Woodland Trust and Oxfordshire County Council.

This is likely to planted between the tennis courts and B4009.