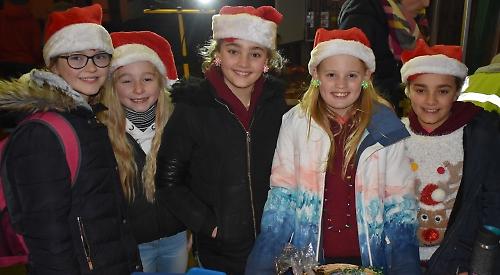 The parade featured scouts, cubs, brownies, rainbows and guides as well as Benson Youth Club, the Little Frogs Toddler Group and pupils of both RAF Benson and Benson primary schools.

It started at the Millstream Surgery and then proceeded along High Street before doing two loops of College Farm. The children then waited for Father Christmas to arrive in his sleigh, which was pulled by a Land Rover with the number plate “Rudolph”.

He then led a countdown from 10 and pulled a giant lever to switch on the lights.

The shops opened late and the Roke and Benson Brass Band led a community sing-song and entertained the crowd.

There was a refreshments stall run by the Friends of Benson School and the Hook Norton Brewery, which has taken over the Crowne Inn, also had a stall. Pupils from Benson Primary School ran their own stall selling items they had made.

Summer Comber-Lye, Beth Tanner, Jamila and Malee Makoka, all 10, and Lilly, 11, and Wilbur O’Callaghan, nine, had made earrings, dog and cat treats and hot chocolate cones.

Lilly said: “It’s a Young Enterprise stall and we wanted to set up a business because we thought it was fun to make things.”

Jamila added: “We’re really creative at home and decided we could sell some of the stuff we made.” The evening raised about £800, which will be split between the primary school and the library.

Organiser Marie Finch said: “We were taken aback by how many people turned up on the night.

“The main reason I decided to get this event going was to get the community together and raise awareness of and support the shops in our high street. They did a cracking trade on the night.”

The evening was funded by donations from the parish council, Cala Homes, Hook Norton and the Friends of Benson School.