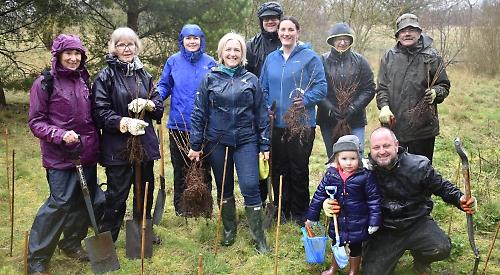 ABOUT 30 residents helped to plant 200 saplings at a Benson beauty spot.

The volunteers put in a mix of native varieties at Warwick Spinney as part of a project led by the Benson Nature Group.

It was the second phase of work at the green space, which is off the Elm Bridge roundabout, after more than 80 people helped plant 300 saplings in November.

The nature group wants to enhance the area to make it more appealing for wildlife and the public to visit.

It received funding of £3,000 this year from waste management firm Grundon and the Trust for Oxfordshire’s Environment for plants, tools and paying contractors to carry out work to improve the area.

Edel McGurk, a member of the group, said the number of volunteers that helped was substantially less than last time but this was inevitable given the wet weather and concerns about the coronavirus pandemic.

Nevertheless, she said the group was pleased with the day. “We were there for several hours and we had a nice mix of people,” said Mrs McGurk. “ We had all ages, families and members of the wider community. It was nice to see that interest in doing something practical. The purpose of the work is to make the area better for wildlife, make it more pleasant for people to enjoy. The planting we’re doing is creating not just habitats for pollinating species but also creating a pollution and noise screen against the edge of the A4074, which is a really busy road.”

Volunteers have also been planting small wildflower plants in the meadow, which will support a variety of species.

Mrs McGurk said: “Benson is growing. It’s expected to get some new green spaces on the back of this development and Warwick Spinney and these spaces will be part of a ring of connecting habitats for wildlife to move between and for people to enjoy.”

Looking ahead, the group wants to ensure the new trees flourish and it will mow the meadow about once a year. Its next large project will be to improve the Benson brook for wildlife.

Warwick Spinney is owned by the Benson Community Association, which has raised funds for community groups since 1972 but is to be wound up.

It proposes to transfer its assets to a new charity called the Benson Community Green Spaces Trust, a charitable incorporated organisation.