Goodie bags and knitting for those living in isolation 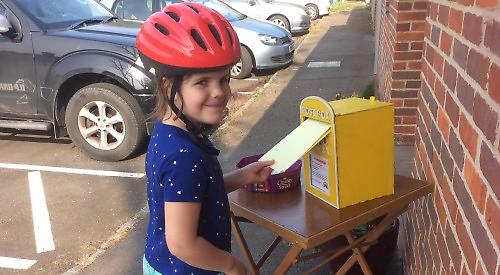 THE new Benson Help Hub is providing support to more than 140 people.

The hub, which is based at the Millstream Centre in the village, is a collaboration between the centre, the Benson Patients’ Panel, Benson Volunteer Helpline and St Helen’s Church.

It provides help and support to individuals who are isolated as a result of the coronavirus pandemic in Benson, Ewelme, Preston Crowmarsh, Roke, Cuxham & Easington and Brightwell Baldwin.

There are now more than 180 volunteers who do food shopping, collect prescriptions, walk dogs and provide hot meals for residents who are vulnerable.

Nicola French, one of the group’s volunteers, said it initially began with people manning phones at the centre but when the country went into lockdown almost four weeks ago, it started working remotely.

The hub “hotline” is open from 10am to 2pm, Monday to Friday, and two people at a time are on the phones. It also gets requests on email which a third person deals with during opening hours.

Mrs French said: “There’s a community Facebook page and lots of people were saying they were more than happy to help so we created a hub which has grown over time and evolved in a good direction.

“The Millstream is the day centre for the elderly and as soon as they had to shut their doors we realised all these people were in isolation and that sparked us into doing something.”

Mrs French said the group was helping Lloyds Pharmacy in the High Street by collecting several prescriptions at once and delivering them to residents, meaning fewer people were having to queue outside.

She explained: “We can go and collect 10 people’s prescriptions at once rather than having 10 more people in that queue.”

The group has also created hub volunteer badges which its members wear when they visit the Co-op, which is also in the High Street. This allows them to buy more of the items usually restricted under government guidelines as they are delivering these to different people in need.

McDonalds donated eggs to the group when it closed its branch in Oxford Road for it to use in the hot meals which are delivered to vulnerable residents and those self-isolating.

Nick Negus, a relief chef at the Millstream Centre, has been providing the meals through his catering company Too Perfection.

He serves about 28 meals on Monday, Wednesday and Fridays. It costs £6 per day or £15 for the week, for two courses. Meals vary each day and dietary requirements are catered for. They are ordered through the Benson Help Hub telephone system and delivered hot to the door.

Volunteers are also free to chat to villagers who might be feeling lonely if they are self-isolating.

Mrs French added: “We’re more than happy to help as long as it doesn’t go against government guidelines. This support is a lifeline to some and appreciated beyond words. We aim to provide a free of charge service to as many people as we can by listening, supporting and providing practical help. It’s been a great team effort.

“Part of our support is to ‘surprise and delight’ our locals with treats along the way — giving them something to smile about, reminding them that even though they’re staying home, they aren’t forgotten.”

Over Easter the group delivered more than 120 goodie bags to self-isolating and shielding neighbours in Benson, Ewelme and Preston Crowmarsh. Inside were handwritten cards by the children from the village, fruit, quizzes, handmade soap, cupcakes, candles, letters and Easter eggs — all donated by villagers and businesses.

The group is also delivering activities bags containing quizzes, a baking and knitting project, as well as books and DVDs.

Mrs French said the group wanted to thank all of its volunteers, businesses and organisations including the parish council, the Bensington Society, cafe No.25, FareShare UK as well as several villagers, who have given donations.

Janet Burtt, who lives in Chiltern Close, said the group collected two prescriptions for her.

She said: “I’m in my eighties and staying at home at the moment and I needed two lots of prescriptions from the chemists. I’ve been a helper on the Benson Volunteer Helpline for 28 years arranging drivers to take people to hospital and things like that. When this all happened, I found myself on the other end, needing help.

“I just think it’s a wonderful community effort to get all these volunteers together. I can’t praise them enough.”

Peter Clarke, who is also in his eighties and self-isolating with wife Joyce at their home in Oxford Road, said the group had delivered food as well as prescriptions. “I know that if I have got problems I can phone them up and I have tremendous confidence in the system,” he said. “It’s typical of Benson that they would have a hub of that kind. It’s also typical that there are more volunteers to do things than there are actual people needing things done to them.”

Meanwhile, the Watlington Community Resilience Group has seen almost every street “adopted” by residents and led by a co-ordinator. They keep in touch with their neighbours via WhatsApp groups or by email.

The town has now been split into four geographical areas — Watlington central, west, east and the hills — and residents have been helping their neighbours with deliveries of food and prescriptions.

Alongside this the parish council has established a “virtual switchboard”, a support number that has cover from 9am until 5pm every day.

Parish staff and volunteers man the line remotely by simple redirection to their own home or mobile phones.

Residents can call for a chat or for help with home deliveries for those that may have gone into self-isolation unexpectedly and may not have used delivery services as yet.

This line is serviced by representatives from the Watlington Business Association. The operators will be able to help callers make orders from Calnan’s butchers, The Undercroft, K is for Kitchen, The Granary, So Sustainable and Watlington Fine Wines.

The Co-op is also running a separate delivery scheme for those in self-isolation.

Parish council chairman Matt Reid said there were now more than 100 volunteers in the town.

He said: “As long as people have the assurance of having someone to get something for them, they don’t mind being locked inside.

“If you asked somebody before this what communities would fair well in this type of situation, then Watlington would because we had a strong community before this and it’s strengthened those ties.”

The Watlington Support Fund, a charity which dates back to 1815, is also offering financial support to residents. It cannot replace state benefits and can only consider applications from residents of the parish of Watlington which includes Christmas Common, Greenfield, Howe Hill, part of Northend and part of Pishill.