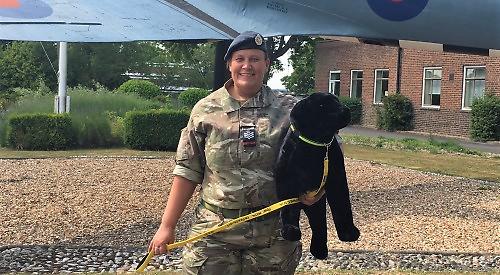 A MENTAL health awareness campaign has been launched at RAF Benson.

Fl Sgt Tracy Barrow has been carrying a toy black dog nicknamed Sirius around with her and personnel take turns to hold it.

Depression and other mental health issues are often seen as a metaphorical black dog, which affect the sufferer at all times and cast a shadow over their life.

Flt Sgt Barrow, who has served with the RAF police for 20 years and is also a co-responder, experienced her own mental health struggle following an operational deployment in 2012 and says she was fortunate to have a support network to help her through those difficult times.

She said: “I didn’t ask for help because of the stigma. Reducing the stigma of mental health is the most important thing. It’s okay not to be okay.”

She is also fundraising for the RAF Benevolent Fund and PTSD Resolution, which provide support and help to service personnel and veterans with mental health conditions and smashed her original target of £500 within days.

Group Captain Adam Wardrope,  station commander, said: “It’s my responsibility to ensure the thousands of people who live and work at RAF Benson are supported.

“While we actively encourage everyone to talk about mental health and wellbeing in the armed forces, it’s not always easy for people to appreciate the difficulties that others go through. I hope that Tracy’s fantastic initiative will help promote understanding and empathy among our team and encourage open and honest conversations to take place.” Meanwhile, senior aircraftman Laura Muir, 22, has been commended as an apprentice of the year after successfully completing the level three survival equipment fitter apprentice with the Royal Air Force.

She should have already been presented with her award but the ceremony was cancelled due to the coronavirus pandemic so RAF Benson celebrated her achievements on International Women in Engineering Day on June 23 instead.

Laura said: “The best thing about my apprenticeship was completing it on a fast-paced operational squadron while enjoying the benefits and lifestyle that the RAF has to offer.”