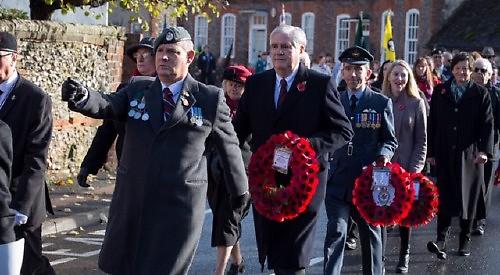 THIS year’s Remembrance Sunday parade in Benson has been scrapped due to the coronavirus pandemic.

Hundreds of people normally attend the event, which involves personnel from RAF Benson.

The parish council has decided to cancel this year’s parade because of the Government restrictions on the size of gatherings to help prevent the spread of covid-19.

It said that South Oxfordshire District Council was unlikely to grant a temporary road closure to enable the parade and ceremony to take place at the war memorial at the junction of Oxford Road and Church Road.

Instead, the council agreed that a small, socially distanced group will lay wreaths at a “suitable” location and time on Sunday, November 8.

The number of people permitted to attend will be informed by the official guidelines at the time and it is possible that even the smaller event could be called off.

The council took on responsibility for Remembrance Sunday events in August after learning that the Royal British Legion could no longer organise the village’s annual parade.

It formed an events working group which has investigated the restrictions on holding parades and gatherings to mark the day.

At the same time, RAF Benson confirmed that it would not be sending personnel to Remembrance parades this year.

The Rev Patrick Gilday, the rector of Benson with Ewelme, also said there would be no church service to mark the occasion.

The working group suggested instead holding a wreath-laying ceremony at the Sunnyside recreation ground at 11am and inviting organisations to send a representative to lay a wreath.

Official wreath-layers would be segregated and socially distanced from any spectators. However, this plan was   thrown into jeopardy when Prime Minister Boris Johnson announced last week that he was tightening the restricitons due to a rise in the number of coronavirus infections.

Pete Eldridge, parade administrator and a member of the working group, told councillors that the situation was changing by the day.

He said timed appointments could be made for groups to lay wreaths so that they didn’t cross.

Mr Eldridge said: “It’s pretty obvious — if you can have only 30 people and we have 900 on our parade. they are not going to give us a road closure in the current situation. Councillor Rob Jordan asked what would happen if many more people turned up than the number allowed.

Mr Eldridge said that couldn’t be prevented but if uninvited people did arrive they would have to be asked to move away.

Cllr Jordan replied: “It’s not very inclusive. I’m not anti-Royal British Legion but what’s the point in having it at all?”

Mr Eldridge said: “I can stop it anytime you like. Cancelling something is easy, but getting a plan to council is going to take time.”

He added that an event could still be held at the war memorial but it would have to be by invitation only.

The parade usually marches along High Street to the war memorial, led by the RAF personnel, members of the Legion, veterans, scouts, cubs, guides and brownies.

When it reaches the memorial the names of the servicemen of the parish who died in both world wars are read out as well as those who died while serving at RAF Benson since 1945.

The ceremony includes a sounding of the Last Post, a two-minute silence and Reveille. Then weaths are laid.

Last year Puma and Chinook helicopters from the RAF base conducted a fly-past.

The parade then moves  to St Helen’s Church for the remembrance service led by Rev Gilday and a chaplain from RAF Benson.