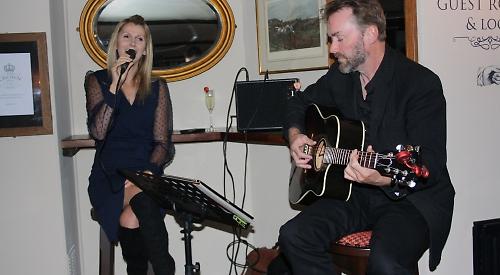 A PUB in Benson has re-opened under new ownership.

The Hook Norton Brewery, near Banbury, has taken over the Crown Inn in High Street from Greene King.

A special VIP launch was held on Thursday evening last week before the pub opened properly the following day.

About 60 guests attended the event, including current and former members of Benson Parish Council and Henley MP John Howell. They were served food and drink by landlord Miles Partridge and his team, including head chef Robbie Gleeson.

Entertainment was provided by singer Fleur Stevenson and Hugh Turner on guitar.

The Crown, which is Grade II-listed, has been refurbished by Hook Norton, which also plans to install a nano brewery in an outbuilding. It has a bar, restaurant and beer garden as well as six en-suite bedrooms.

Mr Partridge said: “The pub is such a gorgeous 17th century building and we were so delighted to be able to rejuvenate it back to its old self and how it should be —  in the heart of the community and trading well.

“Everybody around here has been so welcoming and lovely.”

The pub was due to re-open in April after refurbishment but this was delayed because of the coronavirus pandemic.

Before it was sold, Benson Parish Council had been exploring the possibility of buying the pub, which had an asking price of £495,000. The council had already succeeded in having it listed as an asset of community value.

The pub was run by Tim and Germaine Cullimore from 2013 to 2016 when they asked the council to consider the idea of the community taking it over as they said they could no longer make a living from the business.

It was then taken over by Gary Flux, who runs the Shepherd’s Hut in Ewelme, but he left in September 2018. It was then managed by Tim Harwood.