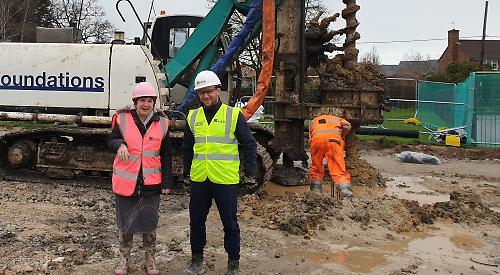 AN extension to Benson Primary School has been completed.

The Orchard Building is a block of three classrooms and a group room that has been built on part of the playing field at the Oxford Road school.

It was handed over this week by the contractor Kier and the school hopes to hold an official opening ceremony next year as well as offer tours to parents.

The extension and a hard play area take up a quarter of the field, which is in the Benson conservation area.

The school says it has gained
some playground space now the work has finished. It needed more classroom space to meet the extra demand for places caused by hundreds of new homes being built in the village.

Headteacher Helen Crolla said she was delighted to see completion of work, which began in January.

The school will start using the building for group sessions after Christmas and the classrooms from the start of the next school year in September.

The classrooms have been named after fruit trees — cherry, apple and damson.

Mrs Crolla said: “Kier have done an amazing job and it’s a really
high quality finish inside so we are really pleased with it.

“It’s a good outcome for the children and the community in the long term. It’s going to enable us to expand in numbers but also gives us some more modern facilities.

“Some of our old classrooms are beginning to show their age a little bit so it will be great to use this space and have more group rooms as well.

“The children have loved watching the building process and the different machinery and Kier have been very good at the school relationship bit and have engaged with the children wherever possible.” The school has previously said that another three classrooms may be needed by 2024 but Mrs Crolla said this would depend on the amount of new housing being built, adding: “There’s no indication phase two would be needed at this current time.”

She thanked the community for their patience while the building work was taking place.

“I appreciate that a building of this scale has an impact on the people living immediately around the school and they have been extremely patient,” she said.