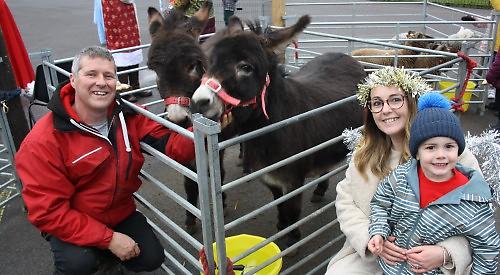 DONKEYS, goats and ducks were part of an “alternative” nativity at Benson Primary School.

Teachers dressed as characters from the story and posed for photos with the school’s four early years and key stage one classes.

The pictures, which were taken by chairman of governors Spencer Parker, will be sent to parents.

The school was unable to stage its usual nativity performances because of the coronavirus pandemic and the children not being allowed to  sing.

The animals, which also included sheep and chickens, were brought along by Basil and Crew, of Maidenhead, and the children had a chance to pet and feed them.

Headteacher Helen Crolla, who dressed as a king, said: “It was very late to put on a traditional nativity so we wanted to offer the children an alternative nativity experience.

“It was a complete surprise for the children who could feed the animals and talk to the farmer about them, which was just lovely.

“The children have had a really tough year and we just wanted to be able to offer them something that was a complete surprise and for them to have memories. The staff were very excited too.”