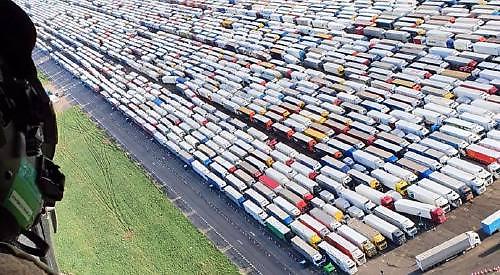 HUNDREDS of covid-19 testing kits were delivered by a helicopter crew from RAF Benson in order to get thousands of lorry drivers home.

Hauliers were forced to spend Christmas in their cabs after France shut its border to UK arrivals because of concerns over the new variant of coronavirus.

Thousands of drivers were stuck in Kent as they waited to cross the Channel.

There were huge queues on the M20 in Ashford as well as lorries packed into Manston Airport.

The French government later lifted its ban but drivers from the UK wanting to enter France had to show proof of a negative coronavirus test taken in the previous 72 hours.

Thousands of tests were carried out on Christmas and Boxing Day and RAF Benson supported the operation by sending one of its Puma helicopters to help.

The crew reported for duty at 6am on Christmas Day and lifted off at 7.30am to spend the day delivering testing equipment to the army teams on the ground.

The helicopter also took senior army personnel on a flight above the huge jam to see the scale of the backlog and where the kits were needed most.

Gp Capt Nick Paton, station commander at RAF Benson, said: “The Puma Force maintains a standby commitment to respond swiftly to any call for assistance from the Government, 24 hours a day, every day of the year.

“As the Puma Force commander, I’m extremely proud of the team who have maintained this essential capability alongside their ongoing commitments in Afghanistan.”