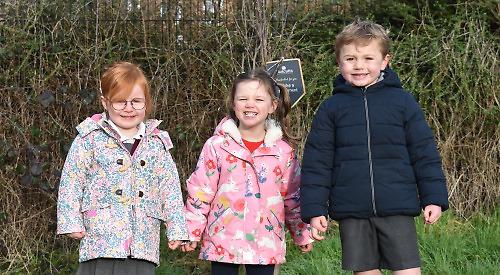 PARENTS have donated a magnolia tree to Benson Primary School to thank staff for looking after their children during the first coronavirus lockdown.

The Oxford Road school was open on some days last spring for just three children of key workers, Aoife Byrne, Daisy Mills and Harry Oliver, who were in the school’s nursery at the time.

Several staff had to care for them on a rota basis and their parents, who are all key workers, wanted to show their appreciation.

Headteacher Helen Crolla said: “Last spring we were open some days just for those children and parents were very grateful for that. They wanted to do something nice by buying a tree, which was lovely. They had a plaque made with the names of the children and the staff that supported them.

“It was the whole team on a rota caring for the children and it’s always lovely to have some thanks, whether that’s an email, a gift or a gesture like this and staff are always humbled by that.

“It’s our job to care for the children but to have this as a reminder every day is lovely.”

The 6ft tree has been planted on the school playing field and should blossom with pink flowers each spring.

It has been placed near some raised beds filled with plants to attract pollinators. The school had to wait for its new Orchard Building, a block of three
classrooms and a group room, to be completed before the planting could take place.

Mrs Crolla said: “We have planted it on the edge of the field where we think it won’t be disturbed by any future building project or footballs flying around and the children can enjoy it in the spring.

“It will be a reminder of that community feeling. Communities tend to bond together in the face of these types of challenges and Benson has done that.”

Mrs Crolla said that under government guidelines pupils could still attend school  during the first lockdown if both their parents were key workers.

She said: “Staff went on a rota to care for those children. We had three or four people on site for them.

“This time the Government has broadened that criteria for what they perceive as critical workers and says that only one parent has to be a critical worker so we have some large numbers in school.”

On its busiest days, the primary now has 80 children attending out of the 250 on the school roll.

Mrs Crolla thanked her staff for their hard work, saying: “The team are very flexible and committed to caring for the children. They come first.”