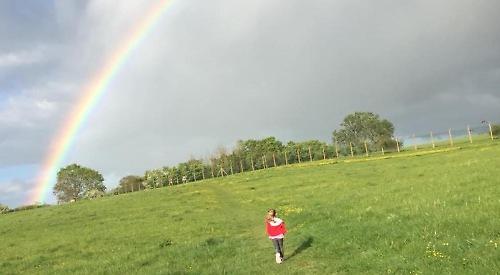 A GIRL who ran nearly 70km to raise money for her Rainbows group has received a commendation.

Each day she would run a lap of RAF Benson, where she lives with her parents, Brett and Rebecca, and siblings, Oscar, four, and sister Eloise, three. She was always accompanied by one of her parents.

Her father is a corporal and currently stationed in Afghanistan.

The family moved to the base in July 2019 having spent the previous three years on a base in Cyprus.

Emelia is a member of the 2nd Benson Rainbows who were supposed to have a sleepover camp last year but this was cancelled due to the pandemic. She decided to raise money to give the group the chance to do something fun when the restrictions were lifted.

Emilia made a countdown poster called “Running for Rainbows” to keep track of her progress and her mother organised an online fundraising page.

She hoped to raise £50 for the Rainbows but ended up making £650 thanks to donations from friends and family.

Her mother, who is studying psychology at Buckinghamshire New University, said: “She loves Rainbows and she had always wanted to do this but she had to wait until she was old enough.

“At the time of the London Marathon last year, all Rainbows were set challenges to do with the number 26 and Emilia wanted to run because I had done the London Landmarks half marathon in October the year before and she came to watch me.

“She likes running and she came up with the idea of running for 26 days and she decided on 2.6km a day. We didn’t realise at the time how much that would equate to. It was a long distance but she went out whatever the weather and there were some days that weren’t very nice, but she loved it.”

Emelia, who attends Ewelme Primary School, said: “Doing the running was a bit hard at the start but when I had done quite a few I liked it and would look forward to it. I would run with mummy or daddy and every time I ran, I got a bit faster.”

She was nominated for the award for her “inspiring level of courage and determination” by her group leader Vicki Jarvis and it was presented by Angela Peel, Oxfordshire’s county commissioner for Girlguiding. She received a badge and a certificate.

Emelia was due to be presented with the award last year but this didn’t happen because of the coronavirus restrictions and bad weather so it was kept as a surprise until finally being presented last week.

Emelia said: “I was surprised and my mum said she was really proud of me. I just wanted to cheer up my friends at Rainbows. I really like getting badges — I’ve got about 25. My favourite one is the pets badge and I have two guinea pigs called Sparkle and Rainbow.”

Mrs Jarvis said: “We are all super proud of her achievement — she is such an inspiration to us all.”