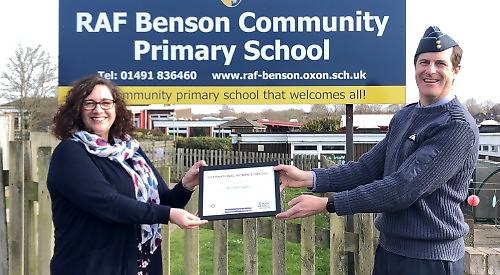 Women working at RAF Benson have been presented with a series of awards celebrating their contributions to operations, leadership and welfare.

Fifty-eight certificates were presented to service personnel, civil servants, contractors and dependants based at RAF Benson.

Among others, Steph Fawdry, the headteacher of RAF Benson Community Primary School, received an award recognising her leadership skills and the support she has provided to families in the community, particularly during the coronavirus pandemic.

Rachel Wilkinson, who was the manager of Costcutter, the only shop on the base, was recognised for her support to the RAF Benson personnel and families over a very difficult period, including arranging for urgent deliveries to those in isolation.

Survival equipment specialist Laura Muir was celebrated for her project management and for motivating her colleagues to be the best versions of themselves.

Emma Gray, a dependant and an NHS paramedic, was recognised for her support to the NHS during the coronavirus pandemic.

The awards were presented as part of the celebrations for International Women’s Day, on March 8.

Squadron leader Damion Weir, an engineering officer on the Puma Force, was also presented with an award for being a “committed gender ally”, consistently advocating for women under his command and creating a safe environment for women on the Puma Force.