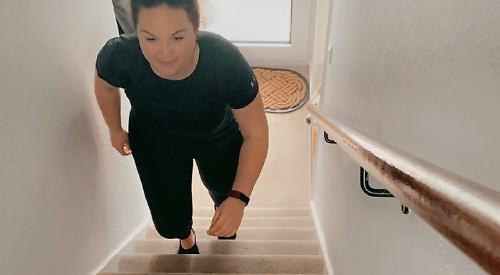 A WOMAN from Benson is spending a year fundraising for a charity.

Vanessa Fields, 28, who is an aircraft engineer at RAF Benson, is taking on different challenges, including a half marathon, step climbs, long distance bike rides and swimathons.

She hopes to raise at least £5,000 for the Royal British Legion, which she chose to support as it has lost so much money as a result of the coronavirus pandemic.

Ms Fields, who joined the RAF in 2015, is being joined in the challenge by her sister Natalie, 26, who works for the RAF police. Their parents both served in the army.

She said: “My sister and I are very close. We are best friends and thought this would be a nice thing to do together and help a charity we were brought up with and is engrained in us.

“There are lots of amazing charities that support armed forces personnel but the Royal British Legion is particularly special for us as it focuses on helping families as well as veterans.” In February, the women ran half a marathon, raising more than £350 each. Ms Fields said: “I hate running, I’m not going to lie, but that is the whole point of it, doing something out of your comfort zone in order to help other people.” Last month, the sisters completed a “climbing Everest” challenge by going up 58,070 steps, or 8,848.86m (29,031ft), the height of the mountain.

Ms Fields said: “I had to climb the stairs in my house 75 times every day for 30 days. It was hard as I didn’t prepare properly for it and my legs hurt so much I couldn’t walk for the first week.

“My friends think I’m nuts but when they understood how serious we are about it they were on board with it and they have been supporting us ever since.”

The Royal British Legion marks its centenary this year.

Ms Fields said: “Military personnel need the kind of support that it provides just to survive service life and beyond.

“Serving personnel deployed far and wide, the families left behind trying to cope with the chaos at home and the veterans trying their best to transition to civilian life — all these situations have been exasperated in the past year by covid.

“Yet, despite Poppy Appeal collections being cancelled and remembrance services being limited, the charity has continued to support military personnel, veterans and their families.”