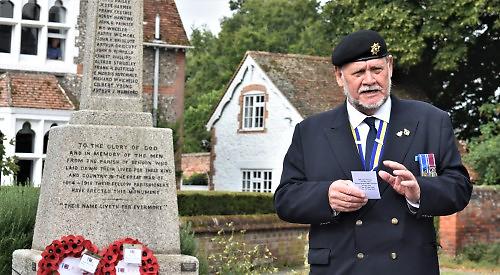 ABOUT 30 people gathered to mark the 100th anniversary of the Royal British Legion at the war memorial in Benson.

Sunday’s event also marked the 75th anniversaries of VE Day and VJ Day, which were not celebrated last year because of the coronavirus pandemic. Rev Stephen Cousins, of the benefice of Benson with Ewelme, led the service and read a short prayer.

Three wreaths were laid on behalf of Benson Parish Council, the Royal British Legion and the Benson branch of the Legion.

Peter Eldridge, Oxfordshire County chairman for the Legion, concluded the ceremony with a short speech.

After the service, he said he was happy with the attendance, adding: “I am glad to have received the support of the community.”

The roads around the memorial were closed from 10.15am to 11am while the ceremony took place.