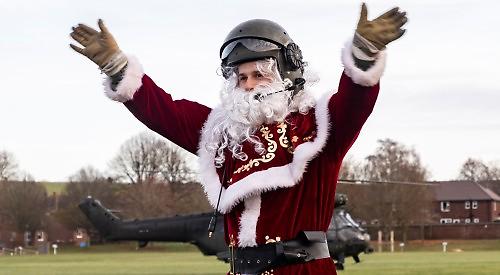 He took to the air in a Puma helicopter from RAF Benson to deliver Christmas challenges to the children.

He visited Watlington and Benson primaries as well as Ewelme school and RAF Benson Community Primary School. While the helicopter couldn’t land at all the schools, the Puma flew around so that Father Christmas could wave to the children through the side door.

He visited several schools with a high percentage of military children to help promote greater understanding of the operational role of military parents.

The visits were designed to help get children into the holiday spirit and encourage their interest in science, technology, engineering and mathematics, or STEM subjects.

The schools were provided with a pack of challenges for the pupils, including making a gingerbread Typhoon jet and working out how much fuel is needed for Father Christmas to deliver presents aboard an RAF vehicle.

Gp Capt Nick Paton, station commander at RAF Benson, said: “Helping Santa to deliver STEM Christmas challenges to schools has been one of the highlights of the year for many of the team involved.

“It has been fantastic to see the smiles on the faces of so many young people and to spread a little festive spirit.”