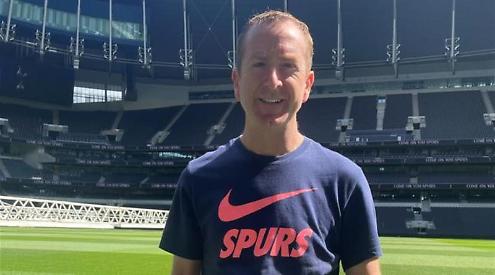 A FOOTBALL coach with a rare type of cancer is organising a children’s tournament for charity.

Simon Cowlard, 46, of Westfield Road, Benson, was diagnosed with myeloma, a type of blood cancer that develops from cells in the bone marrow, in February and is now having chemotherapy.

He is raising money for Myeloma UK, the only charity in the country which deals exclusively with this type of cancer, helping patients access the right treatment at the right time.

Mr Cowlard, who lives with his wife Marwa and son Oscar, 10, will stage the tournament for under under-6, under-7 and under-8 teams at Benson United Football Club in Sunnyside on Saturday, September 3.

He has coached the club’s under-10s team for the past six years.

“I coach the boys’ team in Benson and I play football on a Monday night with gents my age and a little bit older and I’ve done that for years.

“My passion for sports and for football in particular had to be part of the fundraiser. Seeing the kids play with bags of energy and the smiles on their faces ticks all the boxes for me.

“It’s very exciting and I now have a team of 55 volunteers helping me out, which is great. I’ve got football friends who I hadn’t heard from for years offering all sorts of help for the tournament.”

Mr Cowlard, a sales manager with a logistics company in High Wycombe, was diagnosed after suffering from chest pains and is now having weekly treatment.

He said: “At first doctors thought it was just a pulled muscle in the right side of my chest.

“I ended up having X-rays and all of the sudden it started to go downhill. They told me they had looked at the X-rays and that they were not happy with it as there was a bit of shadowing there and they wanted me to go for a CT scan.

“At this stage I thought it sounded a bit serious and I was worried. The scan showed that there was a tumour growing on my third rib.

“At that stage everything is going through your head, your emotions are going crazy and you don’t know whether to speak or not speak, to look at your wife, to look at the doctor, because it’s serious at this stage and you know it is.

“We did a lot more tests during the week, including six or seven blood tests.

“The consultant said, ‘We can shrink it and get rid of it’ and I remember looking at him and crying, saying ‘I hope we really do’.

“On the Saturday morning I woke up with a lot of pain across my back because the tumour was apparently pushing against my back.

“I was in absolute agony but wanted to kick some balls around with my son so we played football for an hour.

“I went to bed that night in a lot of pain but bizarrely woke up the following day feeling fine.

“Then after a walk my legs went numb and in the evening I was at a stage where I couldn’t walk. It was the tumour affecting the nerves.

“An ambulance picked me up that evening and took me to the John Radcliffe. I had to tell the doctors that I had cancer, which was really difficult.

“They moved me to the Churchill Hospital and when I told the consultant what I had done during the weekend he said, ‘I can’t believe you put your body through that’.

“There were times where I thought, ‘This is not really happening to me, this is not me’ and there are times even now where I try not to think about it — it can bring you down and I’m trying to keep a positive mindset.

“When you talk to people about chemo, they think you are sitting in a chair and you are there for a couple of hours but I think I’m really fortunate as I have two injections in my stomach and a lot of tablets.

“I’m a very positive person and very active and at the moment I’m just trying to do as much as I can and live life normally. I think sports help with that.

“Playing football and watching my team play makes me feel normal and that is why this tournament will be really important for me.”

The tournament will feature stalls selling food, children’s activities and a raffle. It is sponsored by Henley Audio, of Didcot.