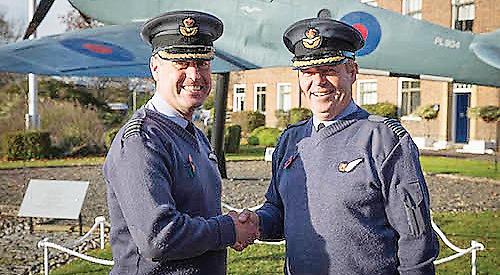 Gp Capt Hamish Cormack takes over from Gp Capt Simon Paterson, who was in post for two years.

He is an experienced helicopter navigator who returns to RAF Benson after a staff tour with the Ministry of Defence.

During his career he has seen operational service in Northern Ireland, Macedonia, Kosovo, Bosnia, Iraq and Afghanistan as well as disaster relief in Pakistan.

After deployment in Libya in 2011, he arrived at RAF Benson to command 230 Squadron, where he saw the final months of service for the Puma Mk1 and the introduction of the enhanced Puma Mk2 helicopters.

He said: “Having spent many of the happiest years of my career at RAF Benson, I am genuinely thrilled and feel enormously privileged to be returning to take command of the station.

“It has always had an air of proud but quiet professionalism, with a focus on people, which creates a very special atmosphere.”

Gp Cap Paterson returns to the Defence Academy at Shrivenham where he has been selected to attend the higher command and staff course.