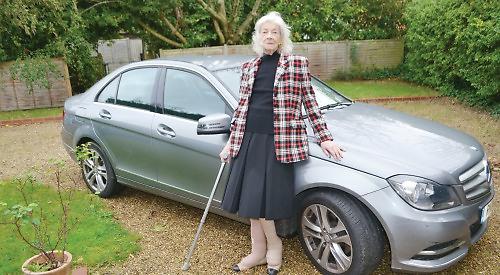 AN elderly woman has told how she was “bullied” by a bus driver in order to get her car out of his way.

Georgina Hitchen, 81, was driving along Plough Lane, Shiplake, when she came head-on with the Arriva 800 service from Reading.

She says it was her right of way as there was a line of parked cars on the opposite carriageway but the bus crossed to her side.

Then the driver began sounding his horn and waving his arms, gesturing she should reverse her Mercedes C180 into a parking space in order to let him pass.

Ms Hitchen, of Dunsden Way, Binfield Heath, said: “I was half-way along Plough Lane, which is very narrow, and cars were parked bumper-to-bumper on the other side so there was nowhere to go. The bus was practically on top of me and I could not do anything. It was squashing my car in.

“The driver was waving his arms at me because he was trying to get round. It was as if he was saying ‘you’re going to get out of the way or I’m going to flatten you’. His behaviour was very bad.”

Ms Hitchen did eventually reverse into a space and the bus driver went past.

She said: “There were no cars behind him and he deliberately came forward and was very aggressive about me getting into a space so he could get past. It was aggressive and it was bullying.”

Ms Hitchen, who is taking medication for breast cancer and needs a crutch to help her walk, was on her way home after visiting the Bell Surgery in Henley when the incident happened at about 3.30pm on October 12.

She said that if it was to happen and she was physically able, she would get out her car and tell the driver he had been recorded on her dashboard camera.

“The next time it happens I’m not going to be bullied,” she said. “I’m going to get out and take a nice long time to walk over with my crutch and give them something to get angry about. Then I can tell them they are being recorded.

“I would say, ‘you are being unfair to me and making it impossible for me to pass — you are being a bully and you are on camera’. It would make them behave themselves.”

Ms Hitchen said hadn’t reported the incident to the Arriva bus company because she didn’t think that she would be taken seriously.

“They take the side of their people and will say they were in the right,” she added.

She said she has always tried to be helpful to bus drivers, particularly when they were manoeuvring around roadworks in central Reading.

“I either stop or make sure I go to the side and do all I can to help,” she said. You should always let people through if it helps them. I’ve noticed that lorry drivers always seem to say ‘thank-you’.”

Renata Hale, operations manager, High Wycombe, for Arriva Midlands, said: “We pride ourselves on the quality of our driving team and provide our drivers with a high level of customer service training.

“It is extremely disappointing if any of our drivers fall below the standards that are expected of them and we investigate any incidents that are reported to us.”

⚫ In 2015 Ms Hitchen won a 14-month battle with the Driver and Vehicle Licensing Agency after it revoked her licence in 2012 following a collision with another car in Henley in March that year. The DVLA said its action was due to either the “possible impact” of her lung disease or an undiagnosed medical condition. Ms Hitchen appealed but this was rejected by Oxford Magistrates’ Court in August 2014. She then took her case to judicial review at the High Court where she won her licence back.