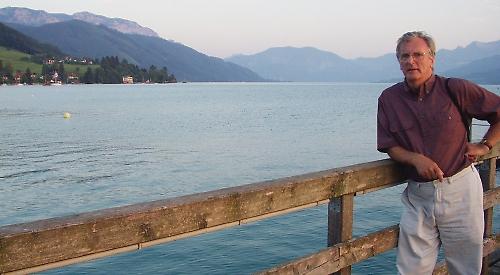 He always loved and excelled at maths and he represented his school in amateur boxing.

He did a five-year City and Guilds of London Institute apprenticeship as a carpenter and joiner during which time he also worked as a milkman.

He was already a workaholic with a large determination to succeed.

On the day he completed his apprenticeship, Francis handed in his notice and started his own business.

Very soon word got about, so he had plenty of work and his company began to expand.

He was a very enthusiastic and positive man, a true entrepreneur, setting up F J Williams Builders and Henley Heating and Plumbing.

By nature, he was very generous with both his time and money and helped a number of people who were having a hard time.

For a number of years he supported boys at Reading Boxing Club to help give them a focus in life.

He inherited his love of gardening from his father Ray and continued the family tradition of growing fruit and vegetables (including tasty grapes in his greenhouse) in addition to prize dahlias, daffodils and other flowers.  He entered many local shows and won many cups.

He loved his involvement in developing the Binfield Heath Flower Show, which also included a big band concert in the big marquee prior to the show itself.

On the rare occasions he allowed himself to relax, he followed cricket and was a member at Hampshire County Cricket Club in Southampton.   In his younger days, he was also an avid follower of Reading Football Club, travelling to places such as Rochdale, Stockport and Huddersfield to watch them play in the old fourth division.

He was also a vice-president of the club during their Elm Park days.

Francis was also keen on boats, having had a number of smaller boats in his younger days, including one named Iroko after a favourite wood.

His favourite evenings out locally would always be at the French Horn restaurant in Sonning, a place which held many good memories as he had been closely involved in the renovations and changes that had taken place there over the years. It was difficult to get him to take time off work but when he did, Carole and he travelled to many parts of the world, including Australia, New Zealand, India, South Africa, Japan and Brazil as well as regularly visiting Spain.

On his return he would love to tell everyone about his travels.

Francis was a socialist and remained so even as he became very successful.

He was very supportive of the NHS, which did him proud throughout his life.

The family are very grateful that in his last months at Abbeycrest Nursing Home in Sonning Common he was treated with considerable respect, dignity and, most of all, kindness.

His big love for children was obvious to all — he loved them and they loved him.

He had a great imagination and could entertain and make up games without any props whatsoever.

Adam, Matthew, William and Isabel were the light of his life and nothing was too much trouble for them.

Some of his happiest times were in their company, be it making brownies, painting fences, playing Uno, baking a Christmas cake so hard that it cracked your teeth, or dressing up as Father Christmas.

A highlight for him was taking them all to see Father Christmas in Lapland, something they all remember.