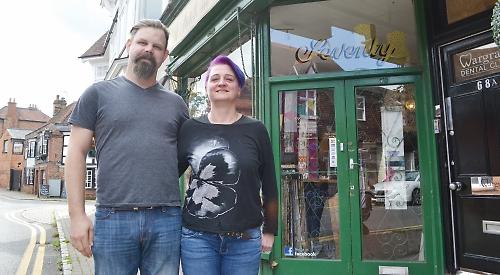 THE owners of an upholstery business who were given six months to leave their premises have found a new base with just days to spare.

Rabea and Alex Hands, who opened A Stitch in Twine in High Street, Wargrave, just over seven years ago, are moving their showroom and workshop to Binfield Heath.

The couple agreed a deal to rent a barn at Hampstead Farm just before Christmas, almost exactly six months after being given notice to leave by their landlord, a neighbouring dental surgery that is planning to expand.

The Hands had hoped to stay in the village, where they live and their seven-year-old son, Logan, goes to school, but were unable to find affordable premises with space for a workshop and showroom.

Several other proposed moves fell through and the couple were worried that they wouldn’t find anywhere as the deadline approached.

They posted an appeal online and asked customers to email them with any leads. Mrs Hands said: “It was horrendous to say the least.

“We had two premises which fell through over storage and another in Twyford where the negotiations broke down but there wasn’t a lot to be honest. We were very worried.”

The couple found the Binfield Heath premises by chance after looking at a workshop at Henley Enterprise Park, which was being vacated by Early Rider, a children’s bicycle maker, to move to Hampstead Farm.

Mrs Hands said: “We contacted Early Rider to see if the farm they had gone to had any space. They said to ask the estate agent and we found this place, which wasn’t on the market.

“It was more or less a week before we had to move out, so we were cutting it very fine. Early Rider did us a massive favour and now they will be our direct neighbours.”

The couple will refurbish their new premises and hope to re-open for business early next month.

Mrs Hands said: “It’s a barn so we need to do some work to create a workshop area and showroom.

“There’s a lot to do. The floors need doing and we want to make it warmer too because it is still a barn.

“It’s a nice, spacious barn and we can have a big showroom with space to do the work next to it.”

The couple hope that customers from Wargrave will come to the new premises and to attract new ones.

Mrs Hands said: “We have to rethink the business a little bit, have more promotion and get ourselves out there.

“We are going to have a new website and have some open weekends.

“We are on the main road between Sonning and Shiplake so hopefully we will get new customers that way. We are allowed to put a sign out on the road.

“We are hoping to open on the first weekend of February. We will have a private opening for existing customers on the Friday and a big open weekend on Saturday and Sunday.”

Mr and Mrs Hands have extensive experience in the upholstery trade.

She studied furniture restoration and conservation with upholstery in High Wycombe, while he is the fourth generation in a family furniture business.

They met 12 years ago when Mr Hands was a customer of Mrs Hands’s and were married in 2013.

They live in High Street with Logan, who attends Robert Piggott Junior School, and plan to stay despite the business moving.

They regularly take part in local events and Mr Hands plays for the village cricket team.

Mrs Hands said: “We never wanted to move out. It’s a lovely village and a nice community.”