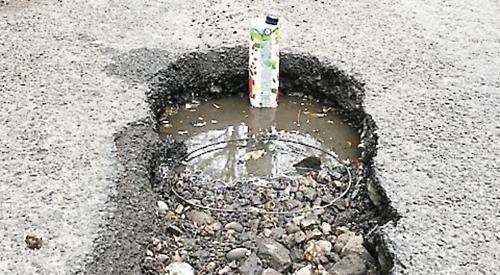 A DRIVER has warned that a country road has become dangerous because it is riddled with potholes.

Andrew Chesters, 52, of Common Lane, Binfield Heath, says the road from Mays Green to Harpsden is in an appalling condition.

He has counted 57 potholes along only a third of a mile with some several inches deep and 18in across.

Mr Chesters said: “This promotes erratic behaviour by drivers. People sometimes slow down in front of others and I’ve seen people lose their temper. When I’m on my bike I’ve seen people swerve at the last moment because they don’t want to go over a pothole. You end up going on the main Reading Road and that’s a car park at the best of times.

“If you can’t use the country roads sensibly and safely it’s going to force people on to major roads, causing congestion.”

Mr Chesters, who has had to replace four tyres on his two Audis, said he knew that Oxfordshire County Council, was under financial pressure but added: “It has become blasé about the quality of our roads.”

He reported the poor condition of the road in March and April but said nothing had been done. “There’s not even a white line around them to show they have been surveyed,” he said.

Kevin Bulmer, who represents Goring on the council, has said that road surfaces are deteriorating faster than defects can be repaired.

The Government has said it will provide another £100million to help repair roads affected by the bad weather earlier this year. Oxfordshire’s share is £1,831,494.