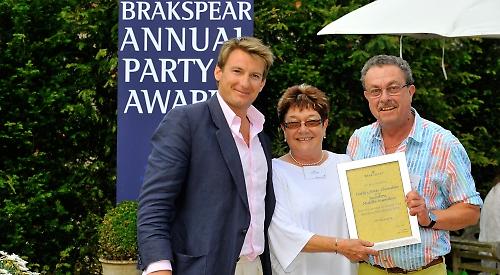 THE landlords of a pub near Henley are celebrating 30 years working with Brakspear.

Graham “Curly” Chandler and his wife Jean, of the Rainbow in Middle Assendon, reach the milestone next Thursday (January 30).

The couple started their hospitality career in January 1990 at the Coach & Horses in Binfield Heath.

Mr Chandler had previously worked as a teacher while Mrs Chandler worked in the retail industry.

After four years later, they transferred to the Rainbow, where they have stayed ever since, turning it into a thriving pub which primarily serves the local community.

Mrs Chandler believes it is their hands-on approach that is key to their success.

She said: “The pub sector has changed almost beyond recognition over the last 30 years. Trading hours are more flexible, people are drinking less, and food’s a bigger part of the mix.

“Despite that, the heart of our offer is the same as it was when we started – a warm, relaxed atmosphere and friendly service.

“Curly and I are always in the pub, we know almost everyone who comes in and we give them all the same warm welcome – that’s what our customers like and it’s what brings them back.”

The couple also take great pride in the pub’s garden, which they created almost from scratch and have nurtured over the last 25 years.

Tom Davies, Brakspear chief executive, paid tribute to the couple. He said: “The pub industry has presented a number of challenges over the last three decades, so for Curly and Jean to still be running a thriving pub is a testament to their skill and resilience.

“We’re very proud to have had Curly and Jean within the Brakspear family all these years and hope they will stay with us for a while longer.”

The Chandlers were among a group of long-serving Brakspear tenants and head office employees who were invited to a special “Decade Club” lunch at the Little Angel pub in Remenham in September. All the guests received a commemorative bottle of champagne, presented in a personalised wooden box.