Call for safety measures at crossroads after crash 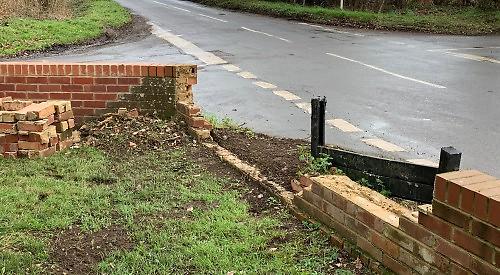 A CALL has been made for safety improvements at a crossroads near Binfield Heath following the latest in a series of crashes.

Two cars were involved in the incident at the junction of Emmer Green Road, Sonning Common Road and Harpsden Road on Thursday afternoon last week.

Two people were taken to hospital with minor injuries and the road was closed for several hours while police spoke with the drivers.

The Hyundai Tucson and the MG3 were both badly damaged after colliding with a brick wall on the corner of Emmer Green Road.

The wall had only recently been repaired following another crash.

David Upsher, of Gravel Road, Binfield Heath, said the crossroads had a history of accidents.

Three years ago, his wife Helen was injured when she was in a collision with another car as she was driving her sister and the couple’s youngest son Stanley, eight, along Emmer Green Road towards Harpsden.

Mr Upsher, 49, who was driving the car behind his wife with their other sons, Charlie, 13, and Archie, 12, saw what happened.

He said: “My life just suddenly slowed down. I think my instinct naturally took over and I got out to see that everyone was all right.

“I remember there being lots of smoke and the car being damaged.

“They suffered whiplash and bruising because the air bags went off and they were obviously in a lot of shock.

“The ambulance and police came and checked them over, as well as the woman in the other car, and we went back home.”

Mr Upsher said drivers, particularly those not from the village, did not pay enough attention to the “Stop” signs and often broke the 30mph speed limit.

He said: “Just before we moved here we heard that someone was killed on that road and it seems as though it is only a matter of time before it happens again. This happens two or three times every year and it seems nothing is being done about it.

“If you speak to people around Binfield Heath they will tell you how dangerous the crossroads can be.

“We want to bring it to people’s attention and get something done about it. I don’t know what the answer is but there needs to be more awareness and we need to make sure drivers are slowing down and stopping.

“There are signs there but people ignore them. Maybe we need speed bumps there. Whenever we use that road now we slow right down.”

Paul Rollason, chairman of Binfield Heath Parish Council, said he was puzzled by the frequency of accidents.

He said: “It is something we just can’t understand. About five years ago, I was coming out of the allotments next to the crossroads and I saw a car go straight through without any hesitation.

“As we have done in the past when accidents have occurred, we will be passing the information on to Oxfordshire County Council.In the past, they have replaced the give way signs with stop signs. There are signs 100 yards before telling you to get ready to stop and the markings have been repainted fairly regularly.

“The accidents seem to be similar and involve a vehicle failing to stop at the stop sign going towards Sonning Comming.

“The county council has looked at various schemes but because the lanes are too narrow, there is not enough room for a mini roundabout. I hope they will come up here again and have a look at it.”

Dave Tyler, 58, of Kings Common Close, Binfield Heath, said: “I have lived here all of my life and it has been like that from the year dot.

“I think a lot of it is people from outside the area. It happens all the time and someone was killed there a few years ago. People are just rushing and not checking the signs.”

Gavin Caple, who runs Binfield Heath Stores with his wife Sharon, said: “It clearly says to ‘stop’ at the junction and people just need to slow down.

“Apart from putting big flashing lights in what more can you do?”