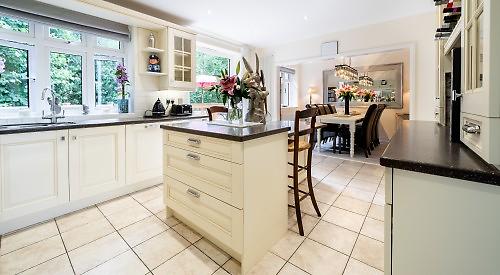 A WOMAN who finished renovating her home two months ago is selling up to move closer to her parents.

But once she put the finishing touches to the grounds the stark reality of the coronavirus pandemic hit home.

Ms Harrison-Wood has only seen her parents once so far this year. Both are in their late 70s and are in the “at risk” category, so she has decided to move back to the north-west and leave the home she has created.

Ms Harrison-Wood said: “I have lived in this area since 2002, first in Wargrave and then two houses in Peppard before moving here.

“I bought this house for me and renovated it for me. Of all the houses I have owned, and I have owned four of five, this is my favourite one.”

When she bought the house, Ms Harrison-Wood had a clear vision of what she wanted. This included a space for her to work, to entertain friends and family and room to have them to stay.

The first thing she did was to request planning permission to build a first-floor terrace.

Ms Harrison-Wood said: “Getting the decking built was a massive project.

“It extends out of a kitchen and living room and so it is a great place to eat and drink wine, read and sunbathe.

“It is really lovely to watch the birds and other wildlife. You can see deer early in the morning.

“It is an extension of the living space and when it was built, it came with a 10-year warranty.”

Once the decking was up, Ms Harrison-Wood worked closely with a builder to create the rooms she wanted.

She said: “I bought a shell of a house. It was all a bit dark and dingy before but I always felt that this could be a space that I could really enjoy living in.

“My professional background was as an interior designer and so I have renovated houses before.

“The lower ground floor was unfinished and I put walls in to make two shower rooms, a gym and bedrooms.

“As a photographer, I wanted a room as a studio and a working area and I wanted to have space for my parents and friends to stay.

“I like entertaining and my dining area can fit at least 10 people.

“The living room has a bar which is great for when people stay. I love to have a big space and having friends round. I had a party here on New Year’s Eve.

“I have always lived in quite large houses.”

Ms Harrison-Wood, who now works as a portrait photographer for high-end London dating agencies, said she gave the renovation her all with every part of the house being updated. “I put a lot of myself into it,” she said. “I lived in it while the renovations were going on. I had a Jacuzzi and three toilets sitting in my lounge for three months.

“I had all of the glass in the house replaced; the roof has had an overhaul and I added external lighting.”

Ms Harrison-Wood said: “Two months ago I finished the outside landscaping and all the fencing was done.

“It is very low cost to run and at it very warm and cosy. I love the open fireplace in the living room.” Ms Harrison-Wood says there is so much space available that it can be repurposed to suit any buyers’ needs.

She said: “The lower ground floor can accommodate several people working from home while the house is big enough to be able to shut that away and enjoy the other living space.

“I have a friend who lives in Wargrave who is having to work in a bedroom and her husband is under the stairs.

“You could also use the rooms in a different way, you could put a pool table or a grand piano in one of the reception rooms so if you had teenagers or children home from university, they can have their own space. It is so flexible.”

Ms Harrison-Wood has two kitchens, one on the lower floor and another on the first floor to make catering easier and also serve as an annexe. “If I am entertaining in the garden, I don’t want to be carrying food downstairs,” she said. “Also, if I have my parents over, if they want to put the kettle on they can while having their own space.

Ms Harrison-Wood says the “peace and quiet” is one of her favourite aspects of the house, which is not overlooked and has the countryside on the doorstep, boasting woodland views from some of the bedrooms and home office.

She said: “What I also love about it is you have the feeling of living in the countryside but Henley is just a £10 taxi ride away so you can still dip in and out of town life.

“I do a lot of work in London so it is great to have good transport links, which was a factor in buying Laurel House.

“I also have lots of parking — you can have eight cars, a horsebox and a boat if you wanted.”

Ms Harrison-Wood says she would move tomorrow if the right offer came in as she would use an apartment at her parents’ home.

“There is no chain from my perspective,” she said. “It will be difficult for me to leave my home as it is such a beautiful house but family must come first.”