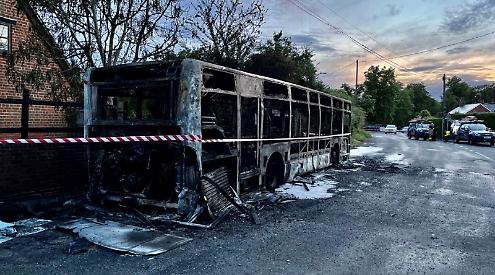 ABOUT 30 people had a lucky escape when they were told to get off a bus shortly before it exploded into flames.

They were passengers on the vehicle, which was passing through Binfield Heath when a cyclist flagged down the driver because there was smoke coming from the engine at the back of the bus.

The driver stopped the vehicle and told everyone on board, including a number of students, to disembark.

He then tried to tackle the flames with a fire extinguisher as the fire spread to overhead cables.

Passers-by and residents tried to help but the fire soon spread and then there was an explosion and the whole bus was engulfed.

Thick black clouds of smoke from the fire were visible from miles away.

No one was injured in the incident, which happened at a bus stop in Shiplake Row at about 5.10pm on Thursday last week as the Arriva Sapphire 800 service was on its way to Reading from High Wycombe.

Five fire crews were called to the scene to tackle the blaze but the single decker was burnt out, leaving just a metal skeleton at the side of the road.

Arriva and passengers praised the driver for his bravery and cool-headedness.

Passenger Diana Jones, who was on her way home to Caversham, said the driver stopped the bus when he was flagged down and got out to have a look at the engine.

He then returned and calmly told everyone to get off as he believed the engine was on fire.

“Everyone was very calm when they left the bus,” she said. “It was in flames within about five minutes. There were quite a lot of young people on their way back home from college and the driver was excellent, telling the kids to move away when they were all standing there filming it with their phones.

“Looking back now, I can’t help but think what might have been.”

Grace Evans, from Reading, who was on the bus with her baby daughter, told the BBC: “The whole bus was engulfed in flames. The windows popped, the tyres popped, the fuel tank went and then the cables fell and there were white sparks and explosions of electricity. You could also hear the firemen shouting, ‘Everyone get back, get back, watch your heads, get back, get back’.”

Two men came out of Binfield Heath Stores nearby to help the driver.

Ms Evans said: “One guy had his arm over his mouth and was spluttering and coughing. There was black smoke — it was fuel that was burning, so they were extremely brave.”

Oliver Bonser, of Heathfield Avenue, Binfield Heath, described the inferno as like something out of a film.

He said: “It was like nothing I’d seen before. There was a huge plume of black smoke about 100 yards from my front door and just a few minutes later there were loud bangs. Everyone was out of the bus so the only real worry were the overhead cables and the houses close by.”

Sian Dodson, who lives in Shiplake Row, said: “It was scary because the cable melted and it came down and we didn’t know where that would go.

“But the fire brigade were fantastic — they were here quickly and got the fire out.”

Elisabeth Ransom, who lives in the village and is a parish councillor, said: “We saw the fire engines going past our house so we knew something was happening.

“We stepped out into the garden and saw this absolutely colossal plume of smoke — I’d never seen smoke like it. So of course we dashed up here because I was terrified about the houses in front. On our way up, someone shouted, ‘It’s the bus that’s exploded’.

“I just thought, ‘Oh God, all those people on the bus’, but thankfully everyone is all right.”

Norman Lane, who lives near the bus stop, said the firefighters were worried about the fire spreading to his neighbour’s cottage next door.

He said: “The heat was quite intense, we could feel it. The firemen were hosing down our fence just to make sure the fire didn’t spread to us. It was a bit scary and it got a bit close because we have the trees along where the fire was and then our house.”

Trevor March, who lives in the next door cottage, was at his allotment when the incident happened.

He said: “When I had the fire engine outside my house, I had my heart in my mouth. Apparently, if the wind had been in the other direction, my cottage would be toast by now.”

Andy Whitwell, of Heathfield Close, said: “The smoke reached our house and I thought someone was having a bonfire until I went upstairs to look out the window and saw smoke coming from the bus stop. There was was a big cloud of really black smoke.

“I thought it was a serious car fire because I can’t see the road from my house but then I went outside to see. There was already a big crowd.”

Mrs Jones and Mrs Evans thanked villagers for offering them water and bringing out chairs for them to sit on.

Mrs Jones said: “I would like to thank the kind people who rallied to the situation and one who gave me and others a lift to Caversham. I didn’t get to speak to the bus driver but his quick action also deserves acknowledgment.”

Mrs Evans said the cyclist had “probably saved 30 lives, myself and baby included”.

The fire crews came from Goring and Reading and used high-pressure water hoses and foam to tackle the fire. They spent more than three hours at the scene.

Some phone cables were also damaged, leaving some residents without internet access and the road surface was damaged. The cause of the fire is still being investigated.

An Arriva spokesman said: “The quick thinking of our driver and his courageous actions ensured that all passengers on board were quickly evacuated.

“He even took the time to address the fire with a fire extinguisher, which we are told significantly helped to slow down the fire impact of escalating. We commend him for his bravery and fast reactions in this challenging situation.”

The bus service was operating as normal the next day.