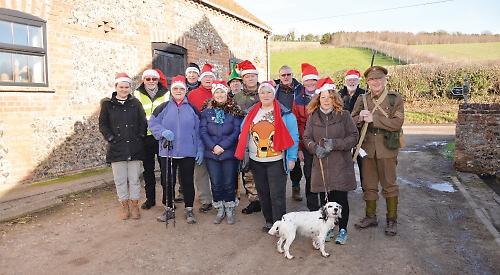 A GROUP of walkers raised almost £1,000 for charity with a sponsored trek.

Saturday’s event was organised by the Reading and Oxford Branch of the Coldstream Guards Association in aid of Walking with the Wounded, which helps vulnerable veterans.

It was part of a nationwide fund-raising campaign by the charity called “Walking home for Christmas”.

The 14 walkers met at Valley Farm in Bix and walked three miles. Among them was John Green, chairman of the Henley and Peppard branch of the Royal British Legion.

Organiser Lyn Murray, joint secretary and treasurer of the branch, said: “The charity helps heal the body and the mind. It does remendous work to help get people into work placements and rebuild their confidence. It means they can get back into work and support their families.”

She thanked Lord Alvingham, a vice-president of the branch, for allowing the use of his land and Bookers Wholesale for donating refreshments.

Refreshments were supplied by Mavis Hallett and Kath Hudson.

To make a donation, visit www.walkinghomeforchristmas.com