If you want the work done... 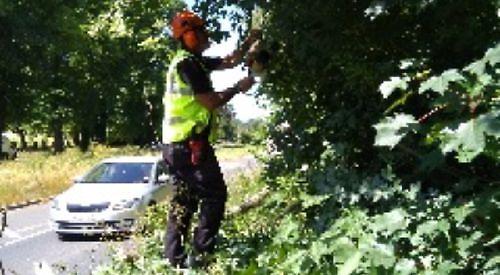 A HENLEY councillor has cut the overgrown verges on a busy approach road to the town because he was tired of waiting for the work to be done by the county council.

David Eggleton said he had feared that an accident could happen as the long grass was blocking the view of drivers using the A4130.

But when he reported the problem to Oxfordshire County Council, the highways authority, nothing was done.

It is the second time this year that he has felt the need to do the work of the council after filling in potholes himself.

Councillor Eggleton used a strimmer to tackle the central verges of the road close to Fair Mile and the junction with the B480, where the grass had grown to more than 1m in height.

He also cut back an overhanging tree, which was blocking a “reduce speed now” sign as you enter Fair Mile. Councillor Eggleton, a member of the ruling Henley Residents Group on Henley Town Council, said he had reported the issues several times with no effect.

He said: “The grass had got to the point where it was probably three or four feet high. You could not see the road and by the time you could see it another car would be on top of you.

“It had to be cut back or there was going to be a fatality or a serious accident. There were quite a few near misses, which was how I came to know about the problem.

“It probably took half a day to do it myself. It’s frustrating it hadn’t been done because I had reported it and so had quite a few other people. These areas have to be cut before other routine cutting is done.”

He added: “The point of the sign is to warn people about the junction and slow down. If it’s covered up by the hedgerow then it may as well not be there.”

Since Cllr Eggleton did the work county council workmen have visited the area and cut back some of the other verges on the A4130.

In March Cllr Eggleton filled potholes in Gillotts Lane and on the Gainsborough estate, where lives, saying he had grown tired of waiting for it to be done by the county council.

He said many of the holes had been correctly reported to the council via the Fix My Street website but nothing was done.

The next day workmen from the county council redid the repairs and fixed other potholes in Gillotts Lane.

Henley’s county councillor Stefan Gawrysiak said: “David did a good job clearing the vegetation because it was dangerous, particularly for people coming out of Fair Mile Cemetery.”