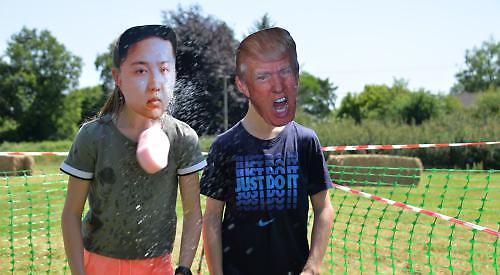 AN inter-village tug-of-war competition was hotly contested at this year’s Bix village fete.

The home team triumphed in the men’s event while villagers from the Assendons were victorious in the women’s and children’s contests.

More than 150 people attended the fete and dog show on the village common in temperatures that reached 32C.

Paddling pools and water bowls were dotted around the site to keep visitors’ dogs cool.

There were stalls run by children, including a “human fruit machine”, “sponge the world leader” and beat the goalie with eight-year-old George Beesley in goal. The children paid £10 for a pitch and were able to keep all their profits.

Visitors could also smash crockery with a cricket ball or throw three boules at an egg suspended in a carved-out tree trunk in an attempt to smash it.

There was also a barbecue and a raffle with a top prize of a flight over the villages in Kevin Duthie’s light aircraft. Other prizes included cheese from the Nettlebed Creamery and a meal for two at Luscombes at the Golden Ball in Lower Assendon.

Entertainment was provided by the Chiltern Brass Band while villager Alfie Hay, co-founder of Henley Youth Festival, was the compere.

The dog show was run by Woofits Walkies and prizes were provided by Naughty Mutt Nice, both from Henley. The categories included most handsome male, prettiest bitch, waggiest tail and most obedient dog.

Organiser Emma Beesley believed the heat may have kept some people and their pets at home but said the fete was still a success.

She said: “It’s not very often that people come together as a community. We’re quite disparate villages — Bix is on top of the hill and Middle and Lower Asssendon are in the valley — so for me it was about working together.

“I’ve had a lot of feedback from people that it was the best fete we’ve had in terms of stalls and atmosphere. They loved the tug of war.”