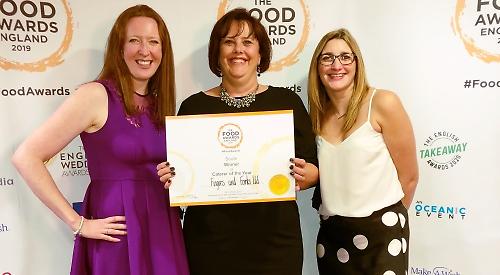 A CATERING company in Bix has been named caterer of the year for the southern region.

Fingers & Forks, which is based at Bix Manor, received the award at the Food Awards England, which presented in Manchester.

The business, which caters for weddings and corporate and other events, was started by chef Kevin Cadman in 2012.

He now runs it with his wife Debbie and culinary director Duncan Basterfield. Mr Cadman said: “We put so much care and effort into making our clients’ dreams a reality and absolutely love what we do, so we’re thrilled to be recognised with this amazing award.”

Mr Cadman worked around the world before returning to the UK and becoming executive head chef of Eventuate, a catering company based in Henley, before going it alone. Fingers & Forks now has a core staff of seven but in any one month can employ up to 45 casuals.

Mrs Cadman added: “Kevin and Duncan between them have got 50 years’ chef experience and run the kitchen side of things and I run the office side. We have lots of repeat clients in the Henley area.

“The business is going from strength to strength and the award just proves we’re doing the right thing and that people like it.”