Twin brothers’ school antics finally become of some use 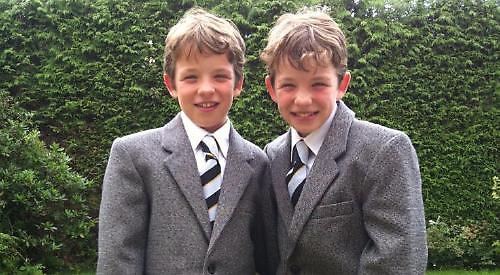 TWINS Patrick and Oscar Johnston admit they did not excel academically at school because they liked to misbehave.

Their antics pushed their teachers’ patience to the limit, often resulting in detentions, and they struggled when it came to sitting exams.

But now it’s the 19-year-old brothers’ wish to perform that is beginning to provide them with a career as actors.

Patrick and Oscar, from Bix, have been signed up by a London agency and have already had some work, including a dual role in an advert for Cesar, the dog food company, although this is yet to air.

It was when they were in year 11 at the Oratory School in Woodcote that the boys finally found something they enjoyed more than mucking about when the drama teacher asked if they wanted to appear in a sixth form production of Amadeus.

They portrayed mischievous messengers, which did not require much of a personality shift but did provide them with some focus and allowed them to show their creativity in a positive way. Patrick says: “We never got on with other lessons but with drama we could express ourselves.

“We had never enjoyed something as much as that play. It switched us on so much. We got a letter from the headmaster saying that he loved our performance.

“We even started to do better at school at this time. I think that opportunity motivated us because for the first time we were getting praise.

“People had started to pre-judge us as the naughty twins who would never amount to anything in life and we wanted to prove them wrong.”

Last year, the Johnstons sent a copy of their performance to Brown and Mills Entertainment and were delighted to be signed up immediately.

While paid work has been infrequent, the niche of being twins has presented them with opportunities that are hard to come by in the industry.

They came close to being on national TV when they auditioned for the Twix “dip or dunk” commercial and made the shortlist. Oscar says: “We auditioned in London and they said they really liked us. That could have been a huge breakthrough for us. Everybody knows Twix and the money for TV adverts is so much better.”

While waiting for their next big opportunity, the brothers work in coffee shops in Henley.

Oscar has worked at Starbucks in Market Place for three months and before that he worked at the River & Rowing Museum café. Patrick is a barista at Caffè Nero in Bell in Street and used to work at Costa in Duke Street.

They are still living at home with their parents, Tony and Layla, who are both lawyers, and sister Sasha, 15, who attends St Helen and St Katharine School in Abingdon. They also have an older brother, Sam, 21, who recently graduated from the University of Liverpool.

Oscar says: “We have very supportive parents. They never told us that we had to pick certain subjects or courses. They believe that if you decide to do something you should see it through.

“Even when we were getting detentions they would not get upset and they have always said that we should be on stage. We would always crack jokes and make them laugh.”

Patrick, who completed a performing arts course at Reading College after school, is aware of the uncertainties of pursuing a full-time career in acting.

He says: “Even if someone offered me unpaid work experience as a runner I would take it. It is just important to get experience.

“I don't know if I want to be a performer for the rest of my life. It is good to have the niche of being twin actors but I am open to other opportunities.”

Oscar, who studied at the Berkshire College of Agriculture, achieving a level 3 extended diploma in performing arts, is in a film called The Heiress, where he portrays a young father in a flashback scene, but he has not been told when this will be released.

He also had two days of filming for the skincare firm Bepanthen.

Oscar says: “The big drawback is the infrequency of work. You really have to push hard and you have to want it. We would consider relocating if we thought it was going to do more for our careers.”