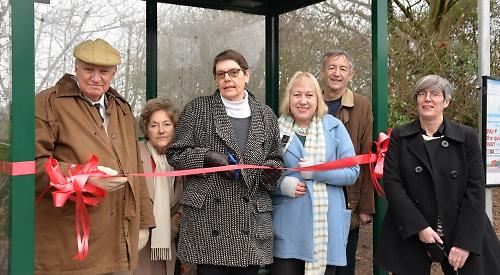 A WOMAN who has worked as a parish clerk for the last seven years is standing down.

Jane Pryce joined Rotherfield Greys Parish Council in 2014 after responding to an advert in the Henley Standard.

She was asked to take on the same role for Bix and Assendon Parish Council as well the following year.

She said: “I didn’t even know what a parish council did. I had experience of doing VAT reclaims and they said I was ideal for the job.

“Doing the parish clerk role has opened my eyes to different walks of life and you learn a huge amount.

“No day is ever the same and there are lots of challenges. There’s lots to learn and the people are so lovely.”

She announced her resignation from Bix and Assendon during the last parish council meeting on May 10, while councillors in Rotherfield Greys were told on Monday.

However, it is likely that she will be staying around for several months as the task of finding and establishing a replacement in each parish takes time.

Mrs Pryce explained: “You have to spend time training them up if they’re not already qualified, so I won’t be able to stand down straight away. If they’ve not been a clerk before, it is always best to stay for a couple of months and for the first few meetings.

“When I joined Rotherfield Greys, the person before me stayed for three months while I was training, so that’s what I base my method on.

“The handover is very important. It wouldn’t fall to pieces but a clerk is responsible for a lot of things.”

Although she is paid to work two hours a week for Bix and Assendon and three hours for Rotherfield Greys, she says she often spends a lot longer on the role.

During the last seven years, she has also been the clerk in Nettlebed and Highmoor.

She decided to stand down as she wants to devote more time to caring for her husband Terry, 71, who was diagnosed with throat cancer and had to have his voice box removed in 2015.

Futhermore, her elderly mother, Patricia Lindon, who lives Caversham Heights, is housebound and struggles to walk.

Mrs Pryce also hopes to spend more time with friends and wants to establish a course for children, teaching them map reading skills and about the countryside code to help with the Duke of Edinburgh’s Award scheme.

She says one of her fondest memories was working on a project to install three defibrillators in 2015.

The lifesaving devices, which cost £1,500 each, were installed outside the village hall in Bix, at the Golden Ball pub in Lower Assendon and the Rainbow pub in Middle Assendon.

She also worked on a project to install a new £7,000 bus shelter on the northbound carriage of the A4130 through Bix, which was unveiled in 2019.

One of her proudest achievements was getting the Comet bus, a service for residents who are unable to use public transport, to come to Middle Assendon. Mrs Pryce said: “This lovely bus service picks up people from their door and takes them to Henley. These are not your usual passengers. This bus is for handicapped people and they are now all friends.

“I am passionate about this service. It is not a shopping trip — it is a lifeline.”

She also worked on the installation of two defibrillators for Rotherfield Greys, which are at the village hall and the Maltsters Arms pub.

The first job she volunteered for as a clerk was to restore an old telephone box in Shepherds Green, which is now a library.

During the coronavirus pandemic, she helped to establish a network of volunteers to support vulnerable residents in Bix and Assendon with requests for shopping or prescriptions.

She said: “It was so heartwarming. We have seen the best of people over the last year. We asked for volunteers and we got way more than we needed.

“I stayed by the computer for two weeks solid and co-ordinated everyone. Each volunteer was responsible for 20 houses. It was lovely to be able to help the community and the response in Bix was particularly good.”

When asked if there was something she would not miss about being a clerk, she said: “I hate doing the minutes. I would love to do shorthand but my writing is appalling.”