Family use life savings to fix home ruined by builder 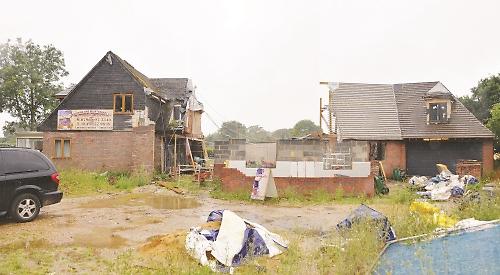 A FAMILY whose home was demolished by a builder who then walked away without replacing it are finally getting their lives back on track.

Naunton and Dawn Cheesman and their five children were confined to just a few unheated rooms in their five-bedroom property in Bix after Mariusz Noga tore more than half of it down without their permission in 2017.

He then disappeared before he had completed the replacement shell, leaving much of the remaining structure open to the elements.

The small amount of work he
did carry out had to be removed because it didn’t comply with building regulations.

The Cheesmans, who had paid Mr Noga £135,000, then had to hire a new builder to finish the project at a cost of at least another £300,000, almost wiping out their life savings.

The work, which was carried out by L&M Construction, of Tilehurst, involved creating an extra bedroom and an extension with a new garage.

A basement which Mr Noga had excavated without consent and failed to add a waterproof lining to had to be filled in.

The house still needs underfloor heating and more plumbing and wiring but these will be added in stages over the next few years because the family want a break from the constant disruption.

Some floorboards must also be replaced because they cracked through being exposed to the elements.

The Cheesmans also had a scare when Everest, which was supplying their double-glazed windows, went into administration last summer and they feared they would lose the £85,000 they had paid.

They say they may not fully recover financially for a decade.

The family spent almost four years confined to the building’s southern half, which at one stage had only an outside staircase linking its two floors so they had to communicate by text message.

There were holes in the roof so rain would seep into bedrooms, destroying property and encouraging mould which caused the family breathing problems.

To create more space, they installed a £3,000 mobile home in the garden which is still there but they will get rid of it once debris and builders’ waste has been cleared from their driveway.

They put most of their possessions into storage and have only just retrieved them.

Mr Cheesman, an IT consultant, said: “We’re so happy to have reached this point.

“It was hard finding someone to pick up where Mariusz left off because nobody would guarantee their own work if they had to build on top of his.

“It was impossible to get a fixed-price quote so we had to agree a ‘time and materials’ contract, which is far more expensive.

“There’s still more to do but we’ve put everything on hold to piece our family life back together. It’s wonderful having everybody back in the house, even if it’s not entirely comfortable yet. There’s a sense of being in control again, which we didn’t have when things were at their worst.

“We had some dreadful nights with water coming into the children’s bedrooms, ruining their school books and causing lots of upset.

“There was no safe haven to escape from it — you had to just hunker down and keep planning the next steps.

“We’re probably still two years from completion but for now it’s more important to spend time with the children instead of making this our main focus and constantly dealing with builders.

“Once you start down that route, they have to practically live with you and it’s a real commitment.

“We’ve lost so many years already and the kids had to get through their GCSEs and A-levels with all of this going on, which was a real challenge and we’re proud of how they handled it.

“Our finances are nowhere near as strong but we have each other.”

Mrs Cheesman said: “There’s plenty more to be done but we’re working through things one room at a time.

“It has been really stressful because Naunton works all day and then spends his evenings on YouTube to research the next stage of the project.

“It’s slow and steady but it feels fantastic each time we accomplish something, which helps us to put the whole experience behind us.

“It was incredibly painful at the time but looking back now hurts less and less.

“Once the house is finished, we’ll be able to say we did it by ourselves and stayed strong as a family.

“I doubt we’ll be able to move again now so rather than downsizing, we’ll always have a nice big home for the children to visit when we’re older.”

Despite their ordeal, the family bear no ill-will towards Mr Noga, who used to live in Damer Gardens, Henley, and traded as Mariusz Builder.

Mr Cheesman said: “Mariusz disappeared soon after we spoke to the Henley Standard in 2017 and lots of his sub-contractors were coming round to look for him because he hadn’t paid them, even though we’d paid him.

“They’d ask, ‘What’s going on?’ and we’d say, ‘I don’t know, you tell me’ but they could see we were in dire straits and we were eventually able to help them by giving them work.

“If we did this again, we’d do it in steps rather than spending thousands on a contract to cover everything. It was all drawn up properly but once we encountered problems with Mariusz, we were told it would take months to get to court and probably wouldn’t be settled in our favour.

“Mariusz was clearly under lots of pressure and never set out to rip anybody off. It hasn’t ended well for him either so we’ve just let it go and moved on.”

In 2017 Mr Noga told the Henley Standard he would finish the job, which he insisted was up to scratch, once he had received £65,000 in unpaid fees from other clients.

He said they weren’t paying because they also felt his work was sub-standard, which he disputed, and possibly because he was Polish.

Several others later complained about Mr Noga’s work, including a couple from Peppard Common who paid about £35,000 for a garage conversion which was never finished. They paid an extra £10,000 for someone else to do the job.

A Henley couple also paid about £40,000 towards a £55,000 extension at their home and the same thing happened.

Oxfordshire County Council’s trading standards department investigated but couldn’t trace Mr Noga, who it is understood no longer lives or works in this area.