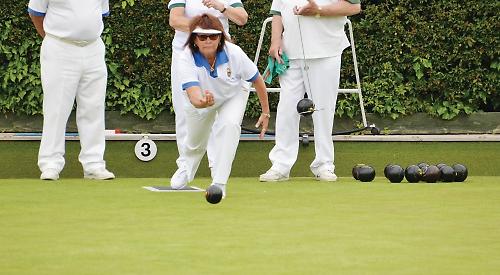 HENLEY played host to TRENTHAMS on Sunday in a friendly six rinks mixed triples match, with the visitors overturning their home defeat earlier in the season winning overall 119-75.

John Rees with Jim Woodford and Keith Lawrance went down by a margin of five shots while the remaining three triples skipped by Gill Robins, Andy Scott and Peter Borsberry respectively went down by much greater margins.

Henley ran out winners on three of the four rinks resulting in 12 points for Henley and two points for Pangbourne. The overall score was 102- 33.

Richard Kingston with Sally Daniells and Maurice Robins were leading by three shots on the 16th end, but dropped a five on the 17th end to go down finally 13-14.

On Wednesday last week, HENLEY had the best possible start to the new league season with a win away at GORING. The hosts won on two of the three rinks but the margin of victory by Colin Ward’s rink with Jeanie Davies, Peter Borsberry and Norman Daniells 22-15 outweighed close losses by Barrie Davies’s rink with Romy Painter, Andy Scott, and Roger Sayer 14-15, and Richard Kingston’s rink with Steve Painter, Sally Daniells, and Peter Watkins 15-18.

HENLEY ran out 73-57 winners away at HEADINGTON in a four mixed triples friendly on May 21.

Mairwen West, Elaine Robinson and John Gutteridge played out a close match. It was 6-6 after seven ends then Shiplake moved into an 11-7 lead after 10 ends.

Marlow then put together a run of winning ends, the last of which was a damaging seven shots to knock the stuffing out of John and his team as Marlow took a 1-19 lead with four ends to play.

Shiplake dug deep reclaiming the mat which they retained until the end but sadly they couldn’t capitalise on the opportunity this gave, gaining just five shots in total, finishing 16-19. Jackie Stafford, John Snook and Sylvia Blackmore found themselves 1-11 down after eight ends. Shiplake rallied in the second half, outscoring Marlow nine shots to four but it was not enough to turn the deficit around as the match finished in the visitors favour, 10-15.

Pat Walker, David Steel and Melvin Stafford got off to a steady start and were 10-4 up after 10 ends. Marlow responded by taking the next two ends for three shots apiece, levelling the scores in the process.

Melvin’s team remained steadfast however and secured the win with five shots from three ends to Marlow’s three from two for a final score of 15-13.

Clare Gutteridge, Sue Reid and Howard West raced to a 10 – 1 lead after seven ends and added five shots by the 10th for a 14-2 lead.

However, Shiplake seemed to then take their foot off the pedal as Marlow won five of the last eight but, even though they outscored Shiplake 8-3, it proved a lost cause as the home side claimed victory 17-10.

Pat Steel, Mike Lovejoy and Wendy Cross dominated their match, restricting their opponents to just one shot over the first seven ends, amassing 11 shots, which included a sixth on the fifth end.

Marlow came back winning three ends for a further five shots but Shiplake remained in control to finish the match comfortable winners 17-11.

Dave Harris, Katie Bland and Matt Shepherd went 8-1 up after five ends. However, Marlow fought back well to close the gap to just one shot after the next two ends.

Matt’s side then put together a run of five ends to re-establish a significant lead 17-7. This proved vital as Marlow then finished with a flourish of their own, gaining eight shots from five of the last six ends but it wasn’t quite enough to stop Shiplake recording an 18-15.

SHIPLAKE lost out away to CHIPPING NORTON last Thursday in the OBL Division 2.

With a weakened side and a player short, they went down 82 shots to 59, picking up one point to Norton’s five.

The rink of Jim Bland started well enough but his charges were completely outplayed in the second half, losing by 16 shots.

The three players on Graham Kennedy’s rink also began well but dropped a six on the sixth end. They then recovered to take a short lead only to then concede a five and a four to hand victory to the home side by 12 shots.

Matt Shepherd’s four fought a tight battle trading shot for shot up to the 16th but disappointingly lost four of the last five ends including the final end for two shots to lose by just the one shot.

The only shred of good news for the visitors came from Barrie Evans’s rink, which held their own for the first half, but scored a crucial five shots on the 15th, then withstood the fightback from the home side, then scored another four on the last to win the clash comfortably.

SHIPLAKE LADIES won 40-29 in a friendly match of two rinks instead of three triples as visitors TWYFORD were only able to field seven players. Phyllis Mansfield’s rink started well and was 11-2 up after eight ends.

Twyford then rallied by scoring consecutive threes but Shiplake matched this and built a comfortable lead finally winning 26-10.

On the other rink, Shiplake led 12-9 after 13 ends but Twyford came back scoring a four on the final end to beat Sylvia Blackmore’s rink 14-19.