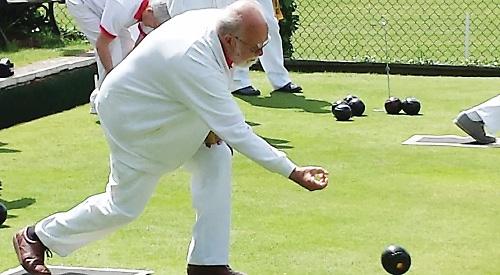 HENLEY, boosted by the arrival of five new players, had a successful week winning two and drawing one of their three matches played.

On Wednesday of last week HENLEY entertained touring side OXFORD MASONIC for their annual visit and played a five mixed triples match in which the hosts ran out 98-67 winners having won on four of the five rinks played.

On Saturday HENLEY drew 102-102 away at WARGRAVE in a six triples mixed friendly in which each side won three rinks each.

On Sunday HENLEY ran out 78-66 winners away at FARLEY HILL in a four rinks mixed friendly match.

The trophy, in memory of the three Goring Heath Almshouses residents who founded the bowls club in 2002, is contested each year by the two clubs and is awarded on the aggregate points score over a home and away match.

Up until half way through the match it looked as if Goring would win comfortably but under skips Maureen Jones on rink one and Clive Goodbourn on rink three, Goring Heath pulled back to lose by only narrow margins. On rink two, thanks to accurate bowling by the Goring team under Tim Elvin, Goring Heath went down 26-8.

Previously both clubs had won the trophy five times each.

SHIPLAKE secured an 86-74 Division 2 Oxfordshire Bowls League win against visitors ADDERBURY to secure 5.5 league points to their opponents’ 0.5 on Thursday of last week.

Graham Kennedy’s rink, with Jim Bland at lead training for the Middleton Cup, took an early lead which they held throughout the tie, and came home winners by four shots.

Similarly, Ryan Buckett’s four started well, and held an 11 shot advantage after 13 ends, but then unexpectedly handed the visitors a six and a four, before reasserting themselves and winning by six.

Barrie Evans’s rink started slowly but then steadily took control despite handing the visitors a four on the last end, but still secured a two shot victory.

Barry Lambourne’s four also began slowly, and trailed at halfway before coming to life, but a three shot end for the visitors on the last gave them a share of the spoils.

The competition was contested by just five teams, all playing four matches of five ends each with the two best performers going through to the final.

The losing finalists were first to qualify for the final with the second final spot being between three of the other competing teams who had all won two matches each. The decision was based on the number of ends won overall, which still left two in the running. It then went down the shot countback, with the team consisting of Katie Bland, Clare Gutteridge, John Gutteridge and Matt Shepherd securing the other final spot.

After the first two ends in the final it was 1-1. Shepherd’s side won the next for a two but dropped the fourth for a single making it 3-2. The final end was a close and tense encounter but Shepherd’s team came away with a further two shots to finish strongly and take this year’s honours 5-2.

On Sunday SHIPLAKE ran out 110-78 winners against MAIDEN ERLEIGH in a six rinks triples friendly.