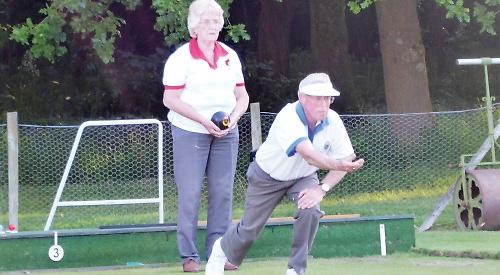 HENLEY secured their first ever win at GORING HEATH in their Plomer Cup clash on Wednesday of last week.

HENLEY made it back-to-back wins on Sunday as they ran out 102-63 winners in their home Oddfellows Triples League match with HURST.

The hosts won on four of the five rinks played to secure 12 league points to the visitors’ two.

SHIPLAKE went down to an 87-55 shot defeat at KIDLINGTON on Thursday of last week in their Division 2 Oxfordshire Bowls League match.

The visitors triumphed on just one of the four rinks played and picked up one league point to the hosts’ five.

Jim Bland’s rink never got going and were out of the tie by the halfway mark and well beaten by the end by 14 shots. Similarly, the four of Graham Kennedy were never in contention, and lost by 18.

Ryan Buckett’s rink took an early lead, and were neck and neck at halfway, but were overtaken, and despite scoring a four on the 17th end lost by four shots. The only winning rink for Shiplake came from the four of Barrie Evans. The front end of David Lloyd and Steve Cubbage were getting thrashed on short jacks by the home team, but a switch to maximum length turned the tie around and a good performance from Matt Shepherd in the second half ensured a four shot win for Shiplake.

SHIPLAKE ran out 116-74 winners at home to SUTTONS in a friendly fixture last Wednesday where they triumphed on all five rinks played.

In a friendly match played earlier this month, hosts SHIPLAKE ran out 94-70 winners against TWYFORD as they won on four of the five rinks played.

SHIPLAKE ran out comfortable 116-66 shot winners at home to GORING last Saturday in the Oddfellows Triples League where they won on all five rinks played. The hosts secured all 14 league points that were on offer.

On the first rink Daphne Jacob’s triple came back from 9-6 down to win 16-12 while Matt Shepherd’s trio also came from behind to win their rink 20-10.

Graham Kennedy’s rink led from start to finish as they eased to a 31-14 win while Jim Bland’s trio came from 5-0 down to comfortably win 28-12. On the final rink Wendy Cross helped her side come from 6-1 down to 18-18 before pulling away to win by three shots.

SHIPLAKE won five of the six triples played in their home friendly against WOKINGHAM on Sunday to triumph by 114 shots to 70. On a hot afternoon there was a slight reduction in ends played on a couple of the rinks while Wokingham were short of two players so two rinks were played with unbalanced sides with an adjustment to the bowls in play to accommodate.

Barrie Evans’s rink eased to a 20-8 win while Sylvia Blackmore’s three trailed 15-11 before narrowly winning 17-16. Wendy Cross’s rink won 23-8 while Matt Shepherd’s trio had the villagers only defeat of the day as they went down 19-16. John Gutteridge’s side led from start to finish as they won 19-6 while Jim Bland’s rink were also in good form, running out 19-13 winners.