Shiplake dominate against rivals in league and cup 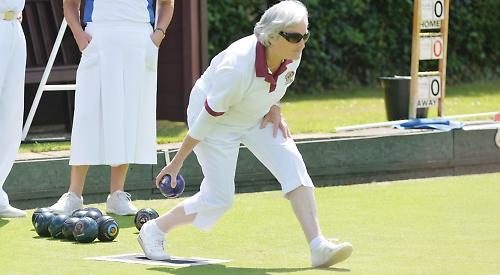 HENLEY continued their fine form in the Oddfellows Triples League as they defeated visitors BURGHFIELD by 104 shots to 59 to secure all 14 points on offer.

On the first rink of five, Wendy Cross skipped her side to a 24-13 win while Daphne Jacob’s trio ran out 26-6 winners.

The rink skipped by Jim Bland went down to a 23-9 defeat to Gill Robins’s trio in the hosts’ only loss of the day.

On Thursday of last week SHIPLAKE MEN crashed to a 76-66 Oxfordshire League Division 2 defeat at home to WITNEY MILLS where the hosts secured just one point to the visitors’ five.

The rink skipped by Jim Bland took an early lead, but were soon overtaken, and the final third of the tie belonged to the visitors who closed out with a five shot victory. Barry Lambourne’s four never really got into their tie, and went down by 12 shots.

The team of Shiplake’s evening were the rink of Graham Kennedy who was back to his best, scoring a six on the fifth end to take the lead, and a five on the 11th to come home comfortably by nine shots.

Barrie Evans’s rink fought a keen battle up to the halfway mark, before going seven behind after 18, but a five on the next end gave them hope, but too little too late and they went down by two shots.

SHIPLAKE won on five of the six rinks played in their triples friendly match at MAIDEN ERLEGH on Saturday to run out 122-88 winners.

John Gutteridge’s rink led from start to finish to run out 21-9 winners while Melvin Stafford’s trio were level at 15-15 before the skip gained a single to give his side a narrow 16-15 win.

The only losing rink on the day was that skipped by Ruth Copp as her trio went down 29-13.

On Sunday SHIPLAKE went down to an 85-65 defeat at home to DESBOROUGH in a five triples friendly.

Dave Webb’s triple charged into a 7-1 lead before eventually being pegged back to draw 15-15.

The rink skipped by Melvin Stafford trailed all match before losing 17-10 while John Gutteridge’s trio were also behind all game, eventually losing out 19-12.

The only winning rink of the day for Shiplake was that skipped by Sylvia Blackmore who, despite drawing 7-7, pulled away to win 18-14. The final rink of the day, skipped by David Steel, were level at 10-10 before going down 19-10.

GORING HEATH ended their run of defeats by defeating PANGBOURNE at home in a friendly on Wednesday of last week as they triumphed on all three rinks.

On Sunday GORING HEATH went down to an 88-81 defeat at DIDCOT in the Plomer Cup. The visitors won on two rinks, lost on two and drew one.

On rink one Didcot cruised to a 25-13 victory while on the second rink Goring Heath were ahead all the way to end 15 but Didcot added eight points in the last three ends to win 22-17.

Goring Heath captain Daphne Walker’s team had a fairly straightforward 18-11 win on rink three, though it was closer on rink four where Goring Heath’s rink skipped by Ralph Gault won 18-15.

On the final rink it looked as if Goring Heath vice-captain Maureen Jones’s team was set for a win at 15-13 up after 17 ends, but Didcot won two on the last end to force a draw.